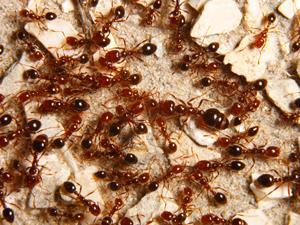 Inspired by the fluid-like motion of flocks of birds, researchers in the US have used techniques from soft matter physics to study the way that fire ants move.

Collective motion is ubiquitous in nature. Fire ants in particular provide a fascinating case study due to the confinement enforced by the foraging tunnels in which they move. A key factor in the motion of fire ants, and other eusocial insects, is the requirement to stop and communicate with each other, leading to traffic jams and blockages along the 50m long underground superhighways in which they travel.

It was these jams that lead Nick Gravish and co-workers at the Georgia Institute of Technology to draw a link between ant traffic and the glassy dynamics of densely packed hard-sphere systems. Social interactions between ants meant that Gravish, now at Harvard University, was able to consider the ants as ‘hard particles that have short ranged interactions, much like the hard particles of granular materials.’ Unlike previous studies on surface traffic, Gravish considered how the geometry of the tunnel constrains the ants’ ability to move in a crowded environment. He notes that ‘when you get really crowded, it becomes more of an issue where you don’t necessarily have control over the system, and the system behaves like any other inert soft matter system.’

Using the tools and language of soft matter, Gravish found that the dynamics of fire ants mirrored that of a fragile glass. This means that the ants can travel relatively freely until a certain population density threshold is reached. Hence, to remain jam-free, the ants simply regulate their movement to remain below this threshold. Gravish believes that this finding could lead to a new form of active matter, termed a smarticle, which can react to the environment and avoid jamming phenomena.

Debashish Chowdhury, a statistical and biological physicist from the Indian Institute of Technology in Kanpur, explains that the collective behaviour of social insects has always been fascinating and even provided plots for animated films like Antz and A Bug’s Life. He praises the work for the ‘characterisation of the ant traffic congestion and jamming in terms of some quantities that are well known powerful tools in the study of the nature of the glass transition.’ Physicist Peter Schall from the University of Amsterdam, the Netherlands, considers this work to be ‘an important and inspiring contribution [to] uncover the fascinating underlying mechanisms and possible generic physical principles’ of collective motion. 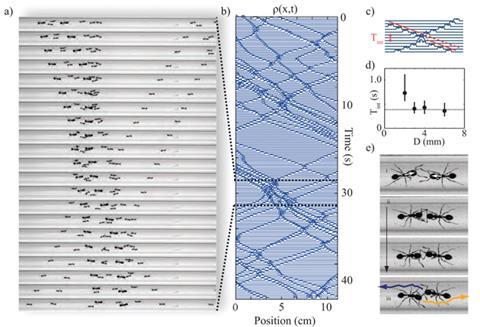 Not only can these techniques be used to learn about fire ants, but the extension to other densely populated biological systems, from the cellular scale to pedestrian traffic in congested hallways, is possible. Furthermore, Gravish speculates that we could use the information ‘towards potentially developing better search and rescue robots’ and understanding how robotics systems would behave collectively.