Graphene nanoplatelets can penetrate deeper into the lungs than their size would suggest, say UK researchers. And once there, the body’s natural defences cannot deal with them effectively. Chronic exposure could therefore lead to inflammation and disease in a similar way to asbestos fibres.

Commercial uses for graphene are already emerging, which means that it is going to be produced and handled in increasing amounts. As graphene is often supplied as a fine dust, Ken Donaldson and his team from the University of Edinburgh, UK, wanted to investigate the potential health risks of inhaling graphene particles.

To do this, the team tested how graphene platelets inhaled from a solution as it evaporates affected the lungs of mice. 'We bought graphene platelets from an internet provider,’ says Donaldson, 'and we found that, although the particles look big, because they’re flat and plate-like, they act like they’re smaller than you would think.’ Donaldson explains that our lungs are normally very effective at filtering out large particles. However, the unusual aerodynamic properties of the platelets mean that they can get as deep into the lungs as spherical particles a tenth of the diameter. 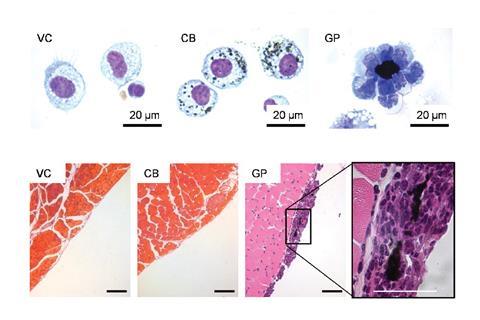 Donaldson points out that appropriate personal protective equipment like facemasks would probably be quite effective at filtering out the platelets. 'What I don’t know is whether the normal sampling systems for detecting respirable particles would pick these platelets up,’ he says. 'You might look at the information from the supplier that says the particles range from 10 to 30μm and assume they’re not respirable and pose less of a risk than they actually do.’

Donaldson’s team also found that, once the graphene platelets lodge in delicate parts of the lungs, the immune response is ineffective at removing them. Particles would normally be engulfed and cleared by macrophages, he says, but the platelets’ size means they cannot be completely engulfed by a single macrophage cell. This causes inflammation and potentially has more serious implications for long term exposure.

These results are consistent with observations of carbon nanotubes and other long, thin fibres - which can penetrate deep into the lungs - says James Bonner, a nanotoxicologist at North Carolina State University, US. ’It’s important to determine what types of shapes of nanoparticles are going to be potentially pathogenic,’ he says. Bonner also adds that while the graphene itself may be biochemically inert, any surface chemistry modifications or contaminants like metals could pose additional risks. ’Coupling that with a shape that anchors it in a particular site would mean it might hang around a lot longer than normal and cause problems,’ he says.