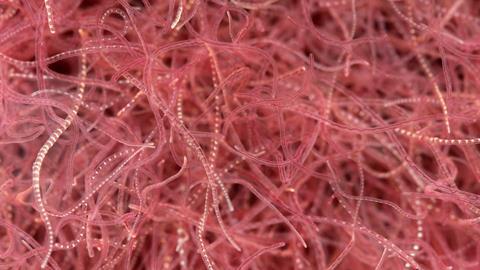 Wriggling worms can serve as an experimental stand-in for the study of microscopic moving filaments known as active polymers. The research could open new ways of studying ‘active matter’ systems made largely from active polymers, which play many vital biological roles.

Active polymers are made up of individual filaments that can use their own energy or energy from the surrounding environment to change their shape, explains physicist Antoine Deblais at the University of Amsterdam. They are found in several important biological systems such as the filaments and microtubules in the cytoskeletons of living cells, and in the whip-like flagella of sperm, bacteria, algae and plankton.

But active polymers are hard to make and to study experimentally, mainly because of their microscopic size. This means scientists know relatively little about how they behave, such as their role in shaping cell membranes.

To find a new way to study active polymers on a larger scale, the researchers turned to Tubifex tubifex – commonly known as sludge worms – which are sold in pet stores as live food for aquarium fish. ‘We think that these living worms are a good platform to bypass the current limitations,’ Deblais says.

They used solutions of water and living sludge worms for experiments in a type of rheometer – a chamber between two rotating plates that can be used to measure the viscosity of liquids. To control the activity of the worms, the researchers varied the water temperature – warm worms are more active than cold worms – and added small amounts of alcohol, which renders them completely inactive for a time. ‘They can sober up after about 30 minutes,’ Deblais says. ‘Sometimes it is better to be a worm!’ 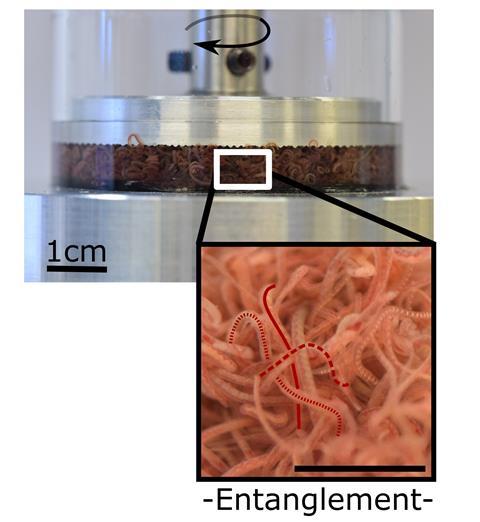 ‘Introducing this system in the active matter community paves the way to a new research field of active polymers,’ he says. ‘We plan to re-investigate what is already known from regular polymer experiments and, of course, introduce activity into it.’

The study of active polymers is very difficult, so experimental methods like this are needed, says physicist Tanniemola Liverpool at the University of Bristol, who was not involved in the research. ‘This new system looks very promising.’

The relatively large size of the worms means the active elements of a system can be characterised more clearly than in microscopic active polymer systems, Liverpool says. The length and flexibility of the worms also means that entanglements can be carefully studied, while ‘the writhing dynamics of the worms also promises novel non-thermal fluctuations’, he adds.