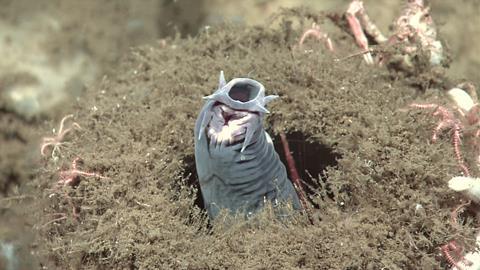 Scientists have demonstrated that they can use mild conditions to convert artificial hagfish slime into one of the stiffest protein-based fibres ever reported.1

Nylon, lycra and Kevlar are well-known artificial fibres made from fossil fuel-starting materials, often under harsh reaction conditions. Natural fibres such as spider silk provide sustainable and biocompatible alternatives but they’re not as strong, and artificial variations lack stability and solubility.

In the past decade hagfish thread has gained attention amongst materials researchers. Hagfish (Eptatretus stoutii) are primitive eel-like fish that live on the bottom of the ocean. They produce thread, or slime, when threatened and their keratin-like proteins are a useful model for strong fibrous materials. Ali Miserez at Nanyang Technological University, Singapore, and colleagues recently genetically engineered Escherichia coli cells to produce hagfish proteins.2 Now they have shown they can turn these artificial proteins into macroscopic fibres that are much stiffer than most reported artificial proteins.

‘To my knowledge, there was one study of artificial spider silk fibres that reported a stiffness of 25GPa.3 In our case, the stiffest hagfish slime-based fibres were could make were 20GPa, which is already very high. We believe that with a better control of the processing method and further protein engineering of the starting protein, we could surpass these values,’ says Miserez.

The proteins start off with a coiled-coil nanostructure. The team found that adding magnesium ions to the proteins gave a film of fibres that they could stretch into macroscopic fibres approximately twice their original length. Stretching changed the coiled-coils into β-sheets that could be cross-linked with lysine to further increase their stiffness.

Vincent Conticello, an expert in protein materials at Emory University, US, says ‘the development of silks has several significant challenges including high hydrophobicity, low solubility and limited functionality for post-processing modification. In contrast, the coiled-coil materials described here can be maintained in a soluble state and undergo a conformational conversion to β-sheets under surprisingly mild conditions. The resultant fibres can be drawn and cross-linked using standard methodologies to afford highly stable and mechanically robust materials’.