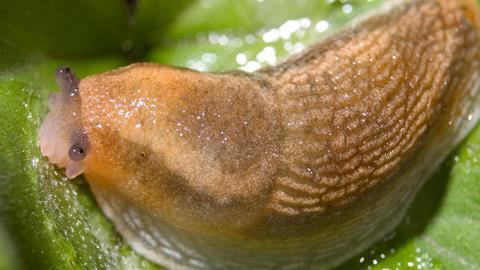 Slug slime has inspired a family of tough adhesives that stick strongly even to slippery biological tissue. The sticky flexible gel consists of two layers, a design inspired by mucus secreted by a land slug, dusky arion (Arion subfuscus).

‘This glue is markedly better than anything currently available,’ says Andrew Smith, a biologist at Ithaca College, New York, who studies biological adhesives and was not involved in the new research. It was much stickier than cyanoacrylate or Super Glue, which is toxic to cells, too rigid for organ repair and incompatible with messy wet biology. The slug slime that inspired the glue came to Smith’s attention the week he arrived at Ithaca College. ‘They are locally abundant here. I picked one up,’ he recalls. ‘It started secreting this orange mucus which set rapidly into a tough gel on my hands. I knew instantly that it was an amazing material and I have been studying it ever since.’

The adhesive repaired a hole in a pig’s heart and continued to work after tens of thousands of cycles of mechanical inflation–deflation. It was also tested on a beating rat heart adhered to the skin of a mouse for two weeks, and sealed a cut rat liver. Adhesion was sustained on tissue even at pressures twice what you see in a normal beating heart.

Smith describes its performance as ‘far superior to adhesives generated for medical use’. Key to its performance is the bioinspired double layer. ‘From a mechanical point of view, we believe the combination of a matrix and an interface is key to the improved performance,’ says Jianyu Li at Wyss Institute for Biologically Inspired Engineering at Harvard University and first author on the paper. This allows it to transfer and dissipate stress. 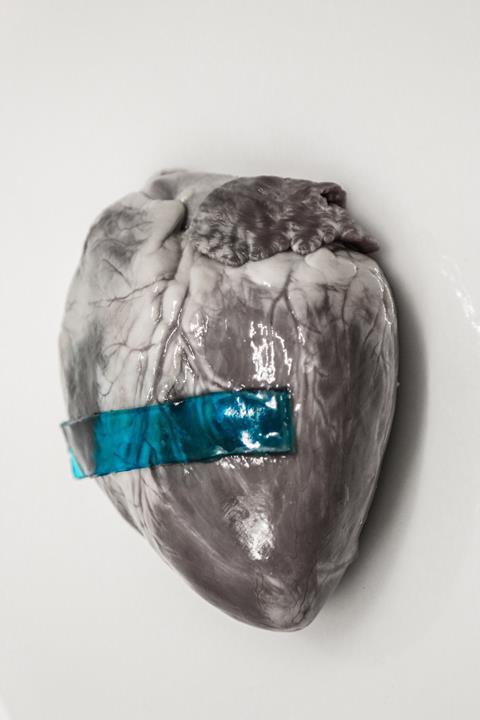 The first layer is the adhesive surface and sticks to the substrate via electrostatic interactions, covalent bonds and physical hooks. A bridging polymer rich in charged amine groups was essential because they bound covalently to carboxylic acids in a hydrogel layer below and the target tissue above. The second layer comprised a hydrogel, capable of dissipating energy. Calcium ions were added to cross-link the alginate network, creating a stiff network that interpenetrated the more ductile polyacrylamide network.

‘The matrix is like a shock absorber. Because of it our adhesive can absorb way more energy compared to conventional adhesives,’ Li says. ‘Compared to CoSeal, a commercially available surgical adhesive, our material is two orders of magnitude better [as regards adhesive strength].’ Importantly for medical applications, it worked well on flexible wet or bloodied tissue surfaces.

The Wyss group is now looking at various possible applications for its tough adhesive. ‘We are also engineering it further to make our material biodegradable, so it dissolves in the body once it has served its purpose,’ says Li. The fact it’s a gel is beneficial. ‘Superglue is a brittle material in the body and there is no way tissue can grow through it. Hydrogel is more tissue-like. Cells can migrate through it,’ says Jennifer Elisseeff, a tissue engineer at Johns Hopkins in Baltimore, Maryland. ‘The challenge now will be picking a clinical indication that makes sense from a commercial perspective.’