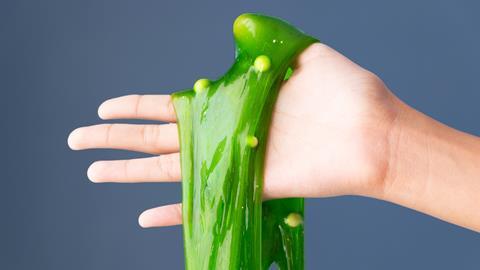 How to make slime

A guide for ghoulish gooeyness at home

Slime is a non-Newtonian fluid: something that ignores Newton’s law of viscosity, flowing under certain conditions but stiffening when compressed quickly. The most famous non-Newtonian fluid is custard, but in the 1970s toy manufacturers latched on to serendipitous discoveries of non-Newtonian polymers made by the chemical industry. One such substance was marketed as ‘Slime’ by Mattel which, thanks to an engaging TV advert and the popularity of movies such as Ghostbusters, became a household name.

Slime was sold in dustbin-shaped plastic containers and usually coloured lurid green. It was manufactured primarily from guar gum, a polysaccharide, with sodium tetraborate (borax) as a cross-linking agent to hook together the polysaccharide chains.

Other manufacturers soon created their own versions, equally oozy but with slightly different characteristics, using polyvinyl acetate (PVA glue, often called Elmer’s glue in the US) instead of guar gum, but still using borax for the cross-linking of the polymer strands. 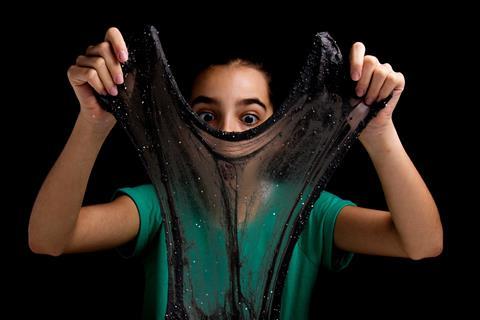 So what’s with the new craze for homemade slime?

Recently, children have latched on to the wonders of slimy ooze and many are making versions of it at home from its readily available ingredients: PVA glue, tap water, food colouring and borax. They compete with each to make the grossest slime and share photos on social media sites – with some even selling samples online. School store cupboards and stationery shops are reporting a shortage of PVA glue as kids buy up stocks to make the likes of ‘galaxy glitter slime’, ‘fluffy slime’ and even ‘unicorn poop slime’.

Ben Stutchbury talks about the chemistry of mucus and slime

It’s borax that has raised the alarm, with concerns that it could be harmful in contact with skin and eyes. However, we have been using borax perfectly safely for decades: you may remember it as a white powder used in laundry to get rid of particularly tough stains. While borax has fallen out of favour on wash day (usurped by zeolites, chelating agents and enzymes), it is still used in some laundry products and other products, including teeth whiteners.

Is borax dangerous, then?

Borax is toxic, although the risk is low in small quantities. Its LD50 (the amount that kills 50% of the time) in rats is 2.66g/kg; so a child weighing 40kg would have to ingest around 100g to be at serious risk.

The US Environmental Protection Agency (EPA) doesn’t consider over-exposure of the skin or inhaling borax dust to be a serious risk to health. In 2006 it revised its 1946 statement on borax and passed it as safe. Indeed, in some countries borax is even used as a food additive to regulate acidity.

Does that mean it is safe to make borax-based slime? 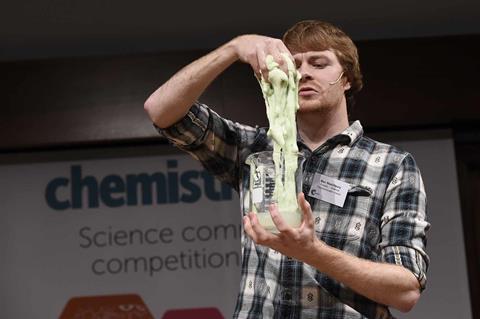 With proper safety precautions and supervision it is safe: there’s a great recipe for schools here. However, inhaling borax powder can cause coughing and lead to a sore throat, and it can also cause painful inflammation of the skin and eyes. The International Chemical Safety Card (0567) for borax suggests that ingestion might lead to nausea, vomiting, diarrhoea, headache, weakness, drowsiness and even convulsions.

If you are concerned, the good news is that there are several other, safer ingredients that might be used to make slime for the playground.

How do I make slime without borax?

There are various recipes. Some suggest using corn flour (cornstarch in the US) or baby talc instead of borax, then mixing it with PVA glue, colouring agents and glitter. Either of these substitutes will still endow the resulting mixture with similar properties to borax slime.

Mixing corn flour with water is great fun. You want about equal parts corn flour and water, but can just add more of either to make your slime thicker or thinner.