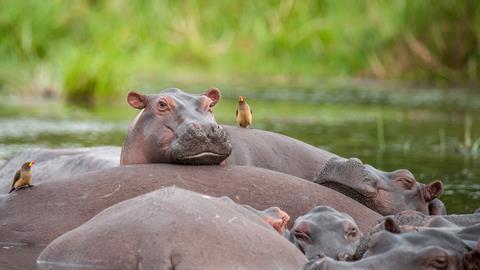 Hippo dung is a serious matter for river ecosystems

Hippo dung has such an effect on water chemistry in the animals’ favourite pools that it can alter the entire ecosystem. New research shows that river pools with many hippos tend to support fewer insects and fish, and the impact could be worsened by human activities.

Hippos eat a lot. In fact, a hungry hippo can easily consume 50kg of vegetation in a single sitting. After nightly foraging bouts, hippos return to their river pools and, in the words of the scientists behind the study, ‘spend most of the day resting and defecating’.

This equates to a huge transfer of organic material from the land into river systems. For example, hippos in the Maasai Mara national park in Kenya are estimated to move more than eight tonnes of dry matter into the Mara River each day.

During wet seasons, when rivers are in high flow, this isn’t too much of a problem – it can even be of benefit as the hippo dung acts as a fertiliser, feeding the river ecosystem. But in the dry season many sub-Saharan rivers experience dwindling water levels that leaves stretches of dry riverbed interspersed by pools that provide a habitat for hippos. At this point, the influence of hippos on the chemistry of their environment can be drastic.

A team led by Keenan Stears from the University of California, Santa Barbara, analysed samples of water from pools in a 50km stretch of the Great Ruaha river in Tanzania. Samples taken from pools with greater numbers of hippos living in them had lower levels of dissolved oxygen and more dissolved and particulate carbon, nitrogen and phosphorus. This hippo-induced eutrophication means fewer insects and fish as they can’t survive the conditions in the most popular pools. In the hippos’ preferred hangouts, fish numbers were down by 41% in comparison to hippo-free locations.

Stears’ team points out that human activities that alter water cycles are exacerbating the effect. Water abstraction and climate change are both increasing the regularity with which sub-Saharan rivers dry up. With these factors expected to intensify in the future, the suffocating effect of hippo excrement on river biodiversity is likely to become a much stickier problem.