Metals leaching from discarded cigarettes found along the Persian Gulf

Cigarettes have left society with a long legacy of poor human health, but it now appears they are also tarnishing the marine environment. Scientists in Iran have discovered metal contaminants may be leaching from discarded cigarette butts into the Persian Gulf.

Although the harmful health effects of smoking are well known, demand for cigarettes remains high. In 2014, the global population smoked 5.8 trillion cigarettes. Up to 5 trillion cigarette butts end up on pavements, in rivers or littered along coastlines every year. 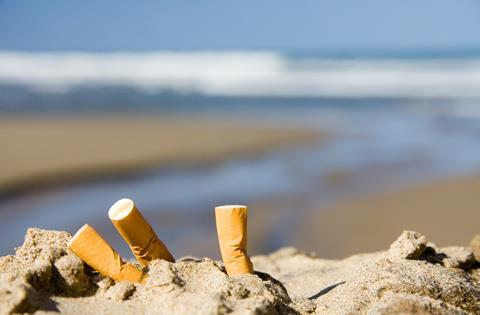 For Sina Dobaradaran from the Bushehr University of Medical Sciences, who was investigating the distribution of macroplastics along the Persian Gulf, the large number of long-forgotten cigarettes littering the coast could not be ignored. ‘During sampling I found out that cigarette butts are one of the main portions of litter on the beach,’ he says. ‘I decided to work on them also, and determine the metals contents of cigarette butts.’

A whole host of metals find their way in to cigarettes through the tobacco and wrapping paper production process. Previous research groups have found humans inhale these heavy metal pollutants, such as cadmium and lead, when smoking. But they are still in the dark as to what impact they have on the environment.

Dobaradaran and colleagues decided to investigate whether these metals can leach from discarded butts. They collected 10cm deep sediment samples from the tidal mark along the Bushehr coastal area. Metals were extracted from the collected cigarette butts using a mixture of nitric and hydrochloric acid. The samples were then vaporised in a furnace and analysed using an atomic absorption spectrophotometer.

The team found traces of cadmium, iron, arsenic, nickel, copper, zinc and manganese. Iron was the predominant metal across all samples, with up to an average of 166µg/g found across all sites. Dobaradaran also took samples 10 days later to find out whether marine currents affect contamination levels, but did not see any significant change.

But the group has found a connection to their previous work on plastic pollution. They posit that cigarette filters, made from the plastic cellulose acetate, may act as transport vessels for these metals in a marine ecosystem.

‘More research is necessary to comprehensively understand the leaching behaviour of metals from cigarette butts in the marine environment,’ Dobaradaran comments. He goes on to cite the effect on environmental quality, diffusion pathways and chemical toxicity all being vital areas of future study.

Richard Gersberg from San Diego State University, US, who has also studied the environmental impact of cigarette butts, believes the research is not without merit. ‘It’s good for what it does cover,’ Gersberg tells Chemistry World. But he attests the environmental impact of these metals is still up in the air: ‘It’s unknown, and this study does not answer the question.’