Hollow oxide can take the heat 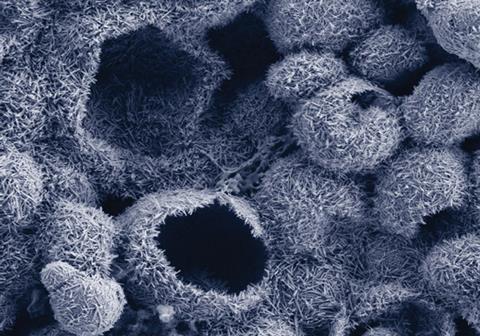 The hollow spheres can protect a material from extremes of heat

Researchers in Germany have developed a twin-layer insulating coating made up of hollow aluminium oxide spheres which could protect industrial parts, such as steam turbine components, from both heat and oxidation damage.

A team at the Fraunhofer Institute of Chemical Technology in Pfinztal created the coating by mixing aluminium nanoparticles with a liquid bonding agent. The viscous mixture is painted onto the metal component to be protected and heated to high temperatures, allowing the aluminium particles to sinter between each other and the metal.

A twin coating forms from this simple manufacturing process, according to the Fraunhofer team. An aluminium-rich base layer is produced that protects the metal from oxidation and the second surface layer consists of air-filled spheres of oxidised aluminium. These hollow spheres are thought to form when the particles form an oxide ‘skin’ that is fed by the molten metal at their core.

As gases are poor conductors of heat, the team found that the hollow particles help insulate metals from very high temperatures. By exposing a coated metal sample to temperatures exceeding 1000°C, research found temperatures on the inner side of the component were just 600°C.

The team say that the next step will be to automate the coating process, making it economically viable for large-scale industrial applications.