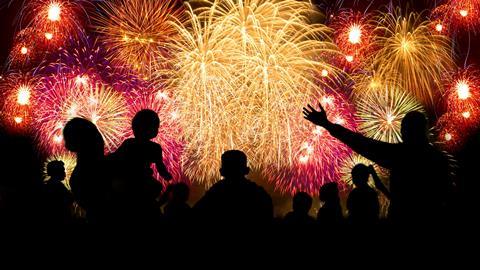 How to time a fireworks display

The gunpowder control that creates an extravaganza

Over the past 10 years, there has been a steady growth in the number of large, public firework displays: not only for national celebrations but also for weddings and public events. Most people are familiar with the idea that different compounds burn with different colours. But how does chemistry enable and control these displays of explosive power?

In a sense, yes; but the difference between a large display and someone using retail fireworks is not just the size of the devices: it’s also the choreography, particularly if the display is synchronised to music. It is the careful interplay of thermodynamics (how much energy is released) and kinetics (how quickly the energy is released) that makes this possible.

Do large displays still use gunpowder?

Lots of it. The fuel used in gunpowder is charcoal, which releases a lot of energy when it burns. However, anyone who has been to a barbeque will realise that charcoal burns very slowly. The rate determining step is both the concentration of oxygen from the air and also how quickly it gets to the charcoal. In gunpowder, a solid source of oxygen (potassium nitrate) is mixed into the charcoal. In this way, gunpowder doesn’t rely on oxygen from the air and so the charcoal burns much more quickly. While gunpowder has been around for a very long time, the exact chemistry is complex and not fully understood. 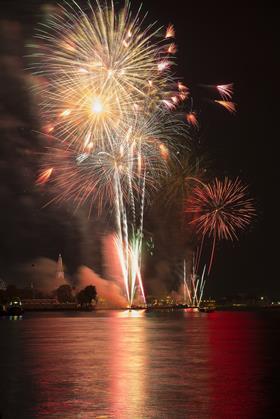 How are displays controlled?

You need a computer. A complex display can use 1500 cues for a 10-minute show. A single cue may start more than one device (simultaneously or in sequence) and many single devices fire multiple times. The timing between these events is crucial and requires an understanding of the pyrotechnic chemistry at work.

So how do you actually start each firework?

We blow a fuse! However, the energy produced from a very thin wire overheating isn’t enough for our purposes, so the wire is embedded in a small bead of highly reactive material. This is reasonably stable (doesn’t react) because there isn’t enough energy to start the reaction at room temperature. However, the energy from the heating wire is enough to push some of the molecules over the activation barrier, lighting the firework. This is exactly how a match works, except that instead of using friction to start it off, electricity is used instead. The name for this device: an electric match.

The fire needs to be led to the correct part of the device, very quickly and without setting light to anything else on the way. To do this, we use a slow match: fine gunpowder glued to pieces of string. This would work on its own, except that the flame travels along the string much too slowly (about 25mm per second.) To speed this up, the slow match is placed in tube of waterproofed paper or thin plastic. The crucial thing here is that the string is loose within the wrapping; this allows the flame and hot gasses to travel forward, greatly speeding up the progress of the fire. The speed at which the flame travels can be 5000mm per second, which is why it’s called quick match and used to link together effects that need to appear simultaneously. 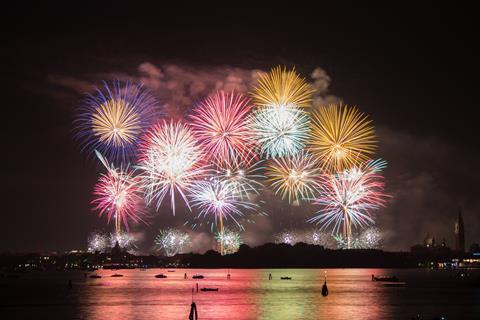 Why do fireworks only burst after a delay?

By using the same chemistry in a different way. There are different types of delay fuse used in fireworks, but one of the most common is the ‘Bickford’ fuse. This is made of a thin line of gunpowder which has had several layers of cotton wound very tightly around it. The cotton ensures that the flame cannot spread forward except by burning through every grain of powder (the cotton is wound so tightly that it doesn’t burn because the oxygen from the air can’t get in).

Another type of delay fuse is called a ‘pressed’ fuse. This is made of a tube of gunpowder that has been heavily compressed, again to restrict the fire from spreading forward.

How does this work in real life?

You put all of the parts together. A finale to a show might be a series of 15cm shells bursting one after the other. The computer sends a small electrical signal to the electric match which heats the wire. The electric match is held in the end of a piece of quick match, and as this is ignited it conducts the flame rapidly down the mortar tube. This ignites the lift charge (a bag of gunpowder under the firework), which not only sends the firework into the air, it also ignites a 5cm piece of Bickford fuse on its outside. As the shell flies 200 metres in the air, the fuse – which leads to the centre of the firework – burns through. At the centre of the firework’s shell is a bursting charge of loose gunpowder. Ignited by the Bickford fuse, this bursts extremely rapidly, throwing pieces of compressed gunpowder, laced with metal salts to give off bright colours, far across the sky.

Meanwhile, spliced into the quick match that led to the first shell was another piece of Bickford fuse. That burns through, igniting a quick match leading down to the next shell…