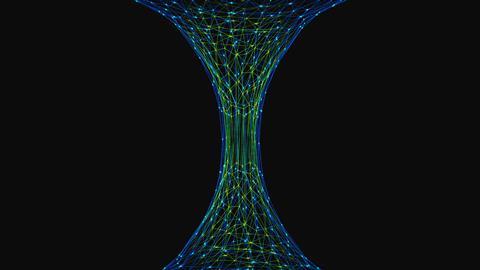 The decades-old mystery of why some perfect single crystals show much lower thermal conductivities than would be expected of such materials may have been solved. A study on the perovskite barium titanium sulfide has shown that instead of being fixed in the crystal lattice, the titanium atoms constantly tunnel between positions, disrupting the flow of heat. The findings could aid the design of thermoelectric materials.

After peaking at around 30K (–243°C), the thermal conductivities of most ordered crystals fall as temperature rises. By contrast, the thermal conductivities of BaTiS3 and some other materials are more typical of glasses: they rise with temperature, but always remain much lower than expected of crystals. This phenomenon has been known since the 1990s, but has never been well understood as most of the crystals in which it appears are structurally complex – BaTiS3 is one of the simplest examples.

US researchers led by Michael Manley, Jayakanth Ravichandran and Austin Minnich now synthesised single crystals of BaTiS3 and studied their local structure using inelastic neutron diffraction and x-ray scattering. Below 100K, the material’s thermal conductivity was lower than any crystalline solid previously measured. Whereas the barium and sulfur atoms – like most atoms in crystalline lattices – moved less as the temperature was reduced and thermal energy was removed, the titanium atoms moved more. 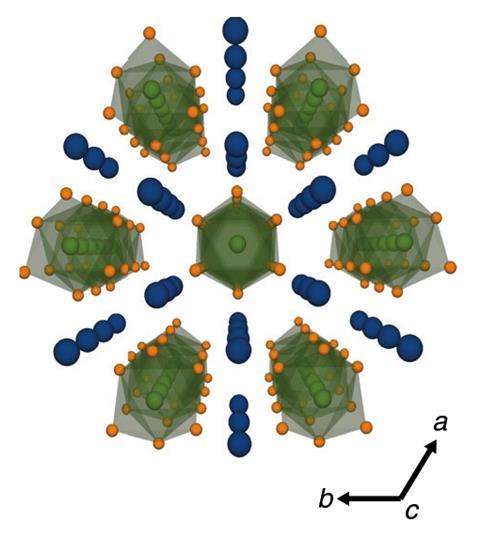 Barium titanium sulfide contains octahedra made up of one titanium atom (green) and six sulfur atoms each (orange), surrounded by barium atoms (blue)

Curiously, each titanium atom sits in a double-well potential, meaning its average position – where it would be drawn in a crystal lattice diagram – lies at an energetic maximum. In practice, however, an atom in the ground state is equally likely to occupy either of the lower energy wells, but very unlikely to be in the centre. This is not especially unusual, explains Manley of Oak Ridge National Laboratory. ‘If you have something with two minima and a large barrier, then after a phase transition the atom will end up in one minimum or the other and that’s the end of it.’ In BaTiS3, however, the barrier is sufficiently small that atoms in the ground state constantly tunnel between the two minima.

As the temperature goes down, more atoms occupy the ground state, and the titanium atoms therefore become more delocalised. Their tunnelling motion absorbs energy from thermal vibrations passing through the material. ‘This is called resonant damping,’ explains Minnich of the California Institute of Technology.

The researchers hope that the phenomenon could aid the development of better thermoelectric materials, which generate an electric current in response to a temperature difference. These require a high electrical conductivity but low thermal conductivity, and a doped crystal might be ideal. ‘The idea of predicting properties based on easily calculable signatures is an area of active interest but it’s still early days,’ says Ravichandran of the University of Southern California.

‘I was actually quite amazed at how they could rationalise the bulk thermal transport in terms of a very simple textbook picture – I think they actually took the model from a quantum mechanics textbook,’ says Olivier Delaire who investigates atomistic transport processes at Duke University, US. ‘I think it’s really important that they combine several methods, both experimental and computational, rather than relying on just one, because sometimes neutron scattering and x-ray scattering can give artefacts.’

How widely the tunnelling mechanism is applicable to other materials with similar properties remains open to discussion. ‘A bigger question is to understand what creates this and can you control it,’ Delaire says.