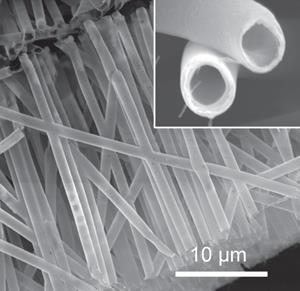 Researchers in Japan have shown that they can remove Escherichia coli from drinking water using tiny tubes made of human serum albumin.

E. coli is a very common type of bacteria, many strains of which are harmless. Some strains, however, such as enterohemorrhagic E. coli O157, are life-threatening to humans. This is particularly problematic in the developing world, where fruit and vegetables washed in contaminated water can cause severe food-poisoning and even death.

The elegant method, devised by Teruyuki Komatsu and co-workers at Chuo University, Tokyo, begins by depositing microtubes made from alternating layers of human serum albumin (HSA) and poly-L-arginine onto a polycarbonate template. The template is then dissolved away to leave a hollow tube, which is just the right size to fit the E. coli bacterium. Key to removing E. coli from a solution is its strong binding affinity for HSA, which attracts the bacteria into the tube. So effective is this binding, that just 1.5µg of microtubes, added to a litre of contaminated water containing 100,000 bacteria were able to remove the bacteria with almost 100% efficiency. The final touch is the incorporation of a layer of magnetite (iron (II) oxide) nanoparticles into the microtubes to allow their easy removal from the solution using a magnetic field.

‘Because the microtubes are made mainly from human protein, they are safe for medical use,’ says Komatsu. ‘We are now considering how to use them in the body.’ The team would also like to adapt the system to remove other toxic bacteria.

The tube is just the right size to trap E. coli

Katsuhiko Ariga, a molecular recognition expert at the International Center for Materials Nanoarchitectonics in Japan, who was not involved in the work, is impressed by the bio-friendly nature of the microtubes. ‘This is a nice step in bridging materials science and the living world, towards the development of environmentally-clean technology,’ he says.