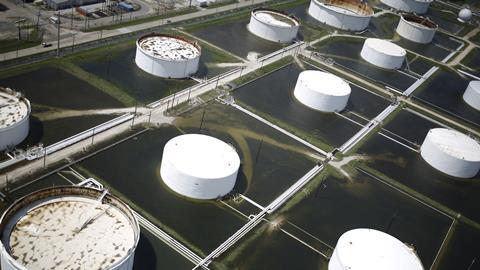 As petrochemical plants in southeast Texas and other areas affected by hurricane Harvey move to restart operations, there are concerns about chemical fallout from its successor, hurricane Irma, which battered much of Florida with winds of up 130 miles per hour.

Environmental groups say hurricane Irma presents hazards because of the large number of potential sources of toxic pollution across Florida. These include phosphate mines and Superfund sites – areas identified by the US Environmental Protection Agency (EPA) as contaminated by hazardous waste posing a risk to human health or the environment.

The concern is that these mega-storms can wash toxic materials into local water systems. For example, in the wake of Harvey, investigators from the Houston health department were alerted by a resident who had found what he believed to be liquid mercury on his property. The officials confirmed that the material appeared to be elemental mercury, and referred the case to the local pollution control department.

However, the county investigators couldn’t locate the mercury. Latrice Babin, a toxicologist with the Harris county team suggests that this could be because the volatile material had evaporated in the heat, or that they were not looking in precisely the right place. ‘I’m not certain whether at that point it becomes an issue of it becoming part of the hydrological cycle,’ she adds. ‘If it is in the open air, it is not quite as much of an issue. But if it’s in the water, of course, it is an issue because it can be absorbed into fish tissue and then ingested by people.’

‘We have no idea what the source could have been,’ Babin adds, saying that there was no record of mercury contamination at the nearby federal Superfund site. ‘I believe the hurricane had something to do with this because it devastated the property,’ Babin adds, but that doesn’t mean it was transported there from another site. ‘It may have already been on the property, in an old thermostat or thermometer.’

Hurricane Harvey demonstrated how important it is to properly safeguard chemical facilities, according to Environment Florida. The organisation said Harvey caused Superfund sites in Texas to be overrun with water, petrochemical wells to sweep contamination into communities, and ultimately led to explosions and fires the at Arkema plant in Crosby, Texas.

‘Even secure sites can fail,’ says Jennifer Rubiello, a spokeswoman for Environment Florida. ‘We are monitoring for local impacts at these sites, but unfortunately it is too early to tell – it could be days, weeks, or months before we have answers.’

The fires at the Arkema facility resulted from massive flooding caused by Harvey, which led the plant to lose critical refrigeration of the organic peroxides manufactured there.

The EPA has since sampled downstream surface water runoff at four locations outside the 1.5-mile evacuation zone around the Arkema plant, but has detected no volatile or semi-volatile organic chemicals in those samples. The EPA also used aircraft to test smoke from the Arkema fires, and found nothing out of the ordinary.

Even secure sites can fail. We are monitoring for local impacts, but it could be days, weeks, or months before we have answers

To prevent further explosion or water contamination, on 3 September Arkema deliberately ignited the remaining six containers of peroxides. The following day, once the unstable compounds had burned away, the evacuation zone was lifted.

In the wake of the incident, seven police, fire and emergency workers are suing Arkema to address injuries they say were caused by fumes from the burning peroxides. The incident, they assert, ultimately resulted from the company failing to prepare adequate backup refrigeration for these unstable materials.

As well as direct contamination and safety issues, the standing water across Texas brings other safety risks. Mosquitoes are breeding in flooded areas, so the government has called in the US Air Force’s specialist aerial spraying unit to treat up to six million acres with naled. This organophosphate insecticide has been withdrawn from use in the EU since 2012, but the EPA asserts that the product is being used in low enough concentrations and by methods that do not cause concerns for human health. The EPA is currently conducting a routine safety review of naled, which is due to be completed by the end of 2017.

Elsewhere, petrochemical facilities in the Houston area are resuming operations. ExxonMobil has begun the process of restarting its refinery and chemicals plant in Beaumont, Texas.

Occidental Petroleum is moving towards restoring operations at its Ingleside plant, with its steam cracker that can produce 550,000m3 of ethylene per year. ‘We didn’t get flooding in the cracker because we had a very robust flood management plan,’ chief executive Vicki Hollub told a Barclays Energy-Power conference on 6 September. However, she said the associated vinyl chloride monomer plant did suffer some wind damage.

‘Now we are in the process of bringing that plant back up – we have all the equipment we need,’ Hollub stated. ‘We are ahead of schedule, but it takes time because you have to make sure that [the systems] are dried out properly.’ She warned that restarting it too early can cause longer-term damage.

Occidental’s four plants in the Houston area were flooded, but Hollub said the water is receding, and all four affected plants are already back generating product. However, they are not yet up to full capacity because of issues with third parties on whom the company depends.

Ineos’s olefins and polymers operations also took a hit, but has since recommenced operations, including at its two steam crackers in Alvin, Texas. The company says it is working to return production capacity to normal as quickly and safely as possible.

Meanwhile, Chevron Phillips Chemical anticipates a delay in startup of its new 1.5 million tonne-per-year ethane cracker in Cedar Bayou because of damage by the storm. The cracker was expected to be completed this year, but rains left parts of the facility under five to eight feet of water.

‘We’re just now getting back into the facility to evaluate the recovery efforts there, and I don’t have a forecast yet,’ Phillips 66 chairman Greg Garland told the Barclays conference. He said the cracker itself faced ‘very limited damage,’ but the contractors working on the project have been off for weeks since the storm.

Although Dow Chemical’s site in Seadrift, Texas remains shuttered, the company’s remaining Texas and Louisiana manufacturing sites are operational. However, infrastructure and logistics limitations in the region have meant that some of these sites may have to ‘adjust production rates,’ according to company spokesperson Jarrod Erpelding.

While damage assessment continues, DuPont’s cracker in Orange, Texas – which has an ethylene production capacity of 680,000 tonnes/year – also remains offline. To date, the company has not found any permanent water damage.

DuPont is still trying to determine the availability of key raw materials, some of which may impact the operation of the cracker. ‘We anticipate that we’ll be producing polymer within a week, but still unsure if we will be producing ethylene,’ says spokesman Michael Hiteshew.