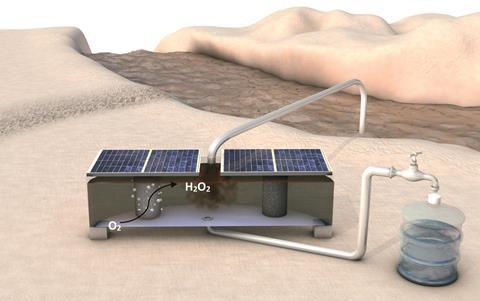 The reactor only needs water, air and electricity to run. The latter could be provided by solar or wind energy

A small reactor that produces the disinfectant hydrogen peroxide could provide 663 million people that don’t have access to clean water with a cheap way to remove waterborne viruses and bacteria.

Conventional methods to decontaminate water include using chlorine – a toxic gas unsuitable for long-term use. Hydrogen peroxide (H2O2) is a more benign alternative, as it readily decomposes into harmless water and oxygen. However, its production is expensive and energy intensive. While there are generators that can make H2O2 in small amounts, the acidic conditions needed to produce the disinfectant often make the device degrade over time, while other generators require expensive palladium catalysts.

To make H2O2 a viable chlorine rival, three research groups at the University of Stanford, US, led by Jenks K. Nørskov, Zhenan Bao and Thomas F Jaramillo have built a low cost and transportable H2O2 reactor. ‘The device can be as small as a shoe box and provide enough clean water for one person, or as large enough to be used by a whole village,’ says Jaramillo. Each device only costs as little as a few dollars, mainly for the plastic housing and carbon catalyst.

Three materials are fed into the reactor: water, air and electricity. Small solar cells provide sufficient electricity for the device, which makes it viable for off-grid communities. Within the reactor, an oxygen reduction and oxygen evolution reaction are coupled to generate a continuous electrochemical circuit. A carbon catalyst reduces atmospheric oxygen to H2O2, which is accumulated in a central chamber. The catalyst possesses a hydrophobic layer to prevent diffusion of the produced H2O2 to the oxygen-evolution electrode.

Frank Osterloh, an expert in solar energy conversion at the University of California Davis, US, remarks that ‘the work is noteworthy because it highlights the possibility of decentralised and sustainable production of hydrogen peroxide – a disinfectant for multiple applications, including the preparation of safe drinking water’.

Although H2O2 is good at eliminating bacteria from drinking water, Norskov, Bao, Jaramillo and their team are now looking at also removing other contaminants in water.