Scientists in Saudi Arabia have offered a new explanation for how hydrogen peroxide forms in water microdroplets produced by spraying and condensation.1 Led by Himanshu Mishra at the King Abdullah University of Science and Technology (Kaust), the group designed a set of experiments to show that water microdroplets are unable to produce hydrogen peroxide without the uptake and chemical transformation of ozone. In revealing the underlying mechanism of hydrogen peroxide production, they hope their work will help clarify recent speculation into this unique behaviour of water.

Despite its ubiquity in both the natural world and the laboratory, the properties of water remain under intense study. Limitations in current experimental and computer modelling approaches have made studying the complex air–water interface in water microdroplets a particular challenge. When a 2019 study2 by Richard Zare and colleagues at Stanford University proposed that hydrogen peroxide forms spontaneously at the air–water interface in water microdroplets, scientists were amazed, and puzzled. How could the strong O–H bonds that make up water molecules break under standard conditions without using a catalyst or an external energy input? Amongst several possible explanations, the group proposed that electric fields at the water surface may be responsible. According to this explanation, in the presence of strong electric fields, water molecules are ionised to form hydroxide radicals, which then recombine to form hydrogen peroxide. With a seemingly new behaviour of water uncovered, scientists set about to explore this phenomenon in greater detail.

The Kaust researchers began by probing the hydrogen peroxide content of water microdroplets formed by spraying and condensation. Using experimental setups based on the original Stanford study, Mishra’s team was surprised to find approximately 115-times and 30-times lower hydrogen peroxide concentrations than those observed in the Zare group’s condensation and spray experiments, respectively. Eager to explain these findings, they designed a set of experiments to explore alternative explanations for the formation of hydrogen peroxide.

Through a mix of experimental and computational approaches, the group first ruled out the contributions of evaporative concentration and mechanical vibrations. While both were found to play a role, the group concluded that neither could account for the concentrations of hydrogen peroxide observed. The team made a key breakthrough when conducting their experiments in the presence of an ozone generator, where they found that the hydrogen peroxide concentration surpassed 30μM for the first time.

‘We kind of ran out of ideas,’ admits Kaust team member Adair Gallo Jr. ‘So, we turned to our setup, which was in a glove box – a clean atmosphere basically. We thought, there has to be some kind of geographical difference at play here.’

‘After we completed our first trial and saw that ozone could be a contributing factor, we decided to search deeper – what was the difference between Kaust and California? We noticed, indeed, that California is a very polluted place in general, and that ozone concentrations are high there,’ explains fellow team member Nayara Musskopf. ‘This really inspired us to devise experiments to confirm that atmospheric ozone concentrations could be generating hydrogen peroxide in microdroplets.’ 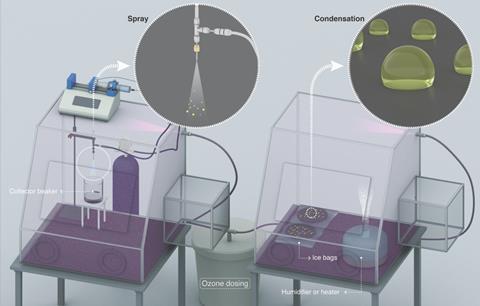 ‘These experiments provide valuable insights into the role played by the air–water interface in the chemistry of water microdroplets, showing that the formation of hydrogen peroxide can result from traces of ozone in the surrounding atmosphere,’ comments Manuel Ruiz-Lopez, an expert in aqueous interfaces at the University of Lorraine, France. ‘To fully understand the mechanisms involved, however, future studies should take into account the affinity of ozone and other reactive oxygen species for the water surface, and assess the potentially important effects of the interface on the reaction dynamics and thermodynamics.’