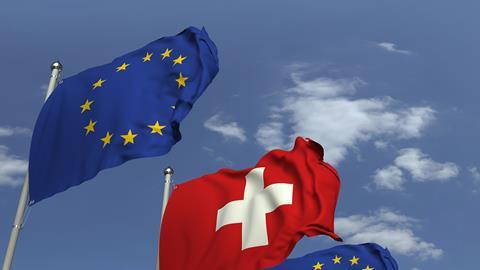 Swiss researchers have welcomed the result of a referendum rejecting a proposal for the country to set its own limits on the number of people entering the country for work, which might have resulted in restrictions on access to EU science funding. Switzerland would have had to revise its constitution and break a 1999 agreement on freedom of movement with the EU if the vote had passed.

The referendum on the proposal was put forward by the right-wing Swiss People’s Party (SVP). However, its opponents argued that it would jeopardise more than 120 other bilateral treaties with the EU. These include agreements on trade, transport and research, in force since 2002, which would automatically cease to apply if the freedom of movement treaty was terminated.

In 2014, a referendum backed by the SVP came out in favour of restricting immigration from Croatia, then a new EU member. It resulted in the EU cutting off all funding for Swiss science, although this was restored in part. The initiative was eventually watered down so that it didn’t impose any fixed limits on EU immigration.

Edwin Constable, a professor of chemistry at the University of Basel, says the result confirms his faith in direct democracy. ‘As president of Euresearch, [a government-supported association aiding Swiss participation in the EU Framework Programmes], I am particularly relieved and hope that it might make the discussions for our participation in Horizon Europe a little easier.’

Swiss higher educational institutions and industry were very concerned about the vote as they depend upon the skills base and mobility of workers within the EU, he explains. Both sectors made strong interventions urging its rejection. This did not happen in 2014, primarily because no one anticipated that it would pass.

Swiss research experienced very tough times after the 2014 vote, Constable says. ‘Not so much in terms of financial support as we implemented a number of compensation schemes, but more in terms of damage to networks that had been established over many years. Swiss participation in Horizon projects was slow to get back to pre-2014 levels. There was also damage to the reputation of Swiss institutions as [European Research Council (ERC)] grants are used as one of the criteria for excellence and Swiss researchers were not eligible for these for a period.’

As a result, he warns UK researchers not to hold out any false hopes about what will happen when the transition period ends. ‘Our experience was that the doors shut with a resounding “clang” after the 2014 vote. With the present tensions within Europe and the background of escalating costs associated with the pandemic, I would anticipate that UK involvement in Horizon Europe – other than as a third party on yet to be established conditions – is extremely unlikely.’

Markus Reiher, a theoretical chemist at ETH Zurich, says it was generally expected that the motion was not going to be accepted by voters. Like Constable, he believes if it had passed, it would have had dramatic consequences for the country, as well as for Swiss science. ‘When [in 2014] Switzerland restricted the access of EU citizens, we were immediately excluded from the EU science funding programmes. However, the Swiss national science foundation immediately put new tools into place to compensate for the cut access to funding tools such as ERC grants.’ Reiher is unsure whether this can be done as quickly in the UK, however.