Industry delves into the digital toolbox

Chemical companies are making their plants and processes increasingly digital, data-driven and interconnected

There is a burgeoning trend of digitisation through the chemicals sector, affecting everything from manufacturing and formulation to laboratory research.

BASF last year introduced a fleet of fully autonomous transport vehicles and tank containers, which move liquids and waste around 150 loading points at the company’s massive site in Ludwigshafen, Germany.

The project is part of an ongoing transformation that has led to the chemical giant building its own 5G transmission network to support the flow of data. ‘Currently we have around 600,000 sensors and actuators at our factory in Ludwigshafen. Digitisation could make it ten times as many,’ a BASF spokesperson tells Chemistry World. ‘So much data cannot be transmitted by 4G or any other conventional technology.’ 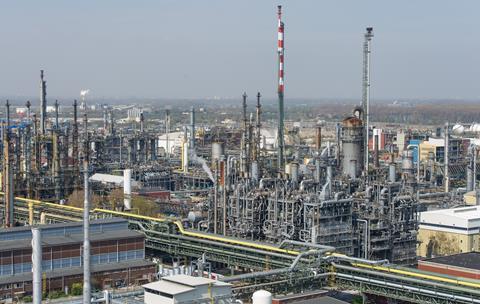 BASF is installing a private 5G data network at its site in Ludwighafen, Germany, to service thousands of sensors, actuators and devices, and guide autonomous delivery vehicles

While there’s a lot of hype around industry digitisation, it’s something a lot of companies are taking seriously, says Alexei Lapkin from the University of Cambridge, UK, whose research focuses on digital technologies in the chemical industries. ‘It’s early days but the field is developing extremely fast, mostly because the gains are perceived to be potentially very significant.’ Lapkin’s team is working with industry on designing machine learning tools to help develop more sustainable reaction pathways and processes.

The chemicals industry is very traditional and we always talk about how we need it to include more risk-taking. Digitisation is really the area where we require that

For example, Bayer has introduced machine learning models that speed up its production processes. David Kaltmayer, head of manufacturing systems and products at Bayer Crop Science, says that, last year, the company introduced a tool that uses process data from syntheses and product quality assessments to recognise irregularities in new batches.

This saves production time as Bayer’s plant operators can see immediately whether a batch is likely to be good to use, before even testing a sample themselves. Based on an artificial neural network, the tool – Quality Release Time Zero (QuaRTZ) – is constantly learning from new data, such as temperature and pressure curves and the quality of the raw materials.

Another, longer standing tool at work in Bayer’s multi-purpose plant in Dormagen is Process Unit Monitoring (PUMon). The software was developed in collaboration with the Fraunhofer Institute of Optronics, System Technologies and Image Exploitation in Karlsruhe, Germany, and uses field sensor technology, connected to various databases and control systems, to monitor processing equipment in the lab. It alerts plant operators to any slowly developing issues, such as build-up of deposits, fouling, corrosion, and valve wear.

The two models illustrate the digital trends that are grabbing hold of the chemicals industry at the moment, says Kaltmayer. ‘The ability to create new models, leveraging existing data sets with new generations of data analytics software, increases production efficiency,’ he says. ‘Machine learning and neural networks are two powerful tools in the world of data science and analytics that create the ability to build, model, and digitise the orchestration of [chemicals] production.’

How can I help you?

In the lab, digital tools can help chemists work more efficiently and advance discovery. But creating such tools requires collecting, and sharing, copious amounts of data.

For the chemicals industry, this will require a cultural change, says Oliver Kröhl, head of strategic business development at German speciality chemicals firm Evonik’s coatings and additives branch. ‘As trained scientists, we tend to consider the data we create in an experiment ‘our own’. That will change tremendously as we are required to put this data into more and more collaborative systems,’ he says.

Kröhl heads the development of Evonik’s ‘Coatino’, a digital assistant that helps formulators find the right additives for specific paints or coatings. Rather than manually poring over catalogues, lists and registers to find an additive, formulators can ask the voice-activated assistant to find a suitable compound, without taking their gloves off. All they need to do is tell Coatino, via a tablet or smartphone, what properties they want in the additive they are looking for.

The tool is still under development. Since Evonik presented its first prototype at the European Coatings Show in March, it has continued testing and improving the system, Kröhl says. The company expects to make Coatino available to the coatings industry in 2020. Eventually, its database could be expanded to include other companies’ products, Kröhl expects.

No chemist can remember thousands of reactions. These tools can show them things they have forgotten or haven’t considered

Deciding to develop Coatino, in 2018, was arguably a bold move for Evonik. Populating the tool’s database was time- and resource-intensive, as was training the system to recognise specific coatings terminology with the help of speech recognition software. But Kröhl encourages the chemicals industry not to shy away from the risks involved in digitisation projects.

‘The chemicals industry is very traditional and we always talk about how we need it to include more risk-taking. Digitisation is really the area where we require that,’ he says. ‘And if we don’t do it, somebody else will.’

Sarah Trice, head of cheminformatics technologies at Merck, has observed the synthetic chemistry market getting over its initial apprehension towards digitising the lab. ‘Chemists have warmed up to the idea that these new tools are not here to replace them, they are here to augment their expertise,’ she says.

Trice manages the development of Synthia, a retrosynthesis package that lets chemists analyse custom pathways for known and novel molecules. Merck acquired of the tool, formerly called Chematica, in 2017. Since then, Merck has been working on converting it into something commercially viable for the synthetic chemistry market, Trice says. In April, it officially launched Synthia as a web-based application.

Now, it is gradually ‘becoming a starting point for chemists to see which synthetic pathways are available, and then use their own expertise to pull together the pathway that they think will be the most viable in the lab,’ Trice explains. ‘No chemist can remember thousands of reactions. The tool can show them things they have forgotten or haven’t considered.’

Synthia draws from a database of advanced organic synthesis rules and algorithms that scan millions of data points and pathways to find the most cost-effective routes to chemical targets. Currently, Synthia’s database holds about 76,000 reaction rules, each of which has been painstakingly coded by hand, Trice says. Meanwhile, she and her team are continually updating the database and search algorithms with the help of the founding academic team, led by Bartosz Grzybowski of Ulsan National Institute of Science and Technology in South Korea.

Their goal, Trice explains, is to create a go-to reference tool for every chemist in academia or industry: ‘Think of Google maps or a calculator: how enabling those tools are that everybody has in their pocket. Our goal is that every chemist has access to Synthia and can use it to accelerate their research. We all benefit when chemists can do their work more efficiently.’

For Trice, this is just the beginning. The next frontier for Synthia is to draw from a database of experimental data that will allow it to predict precise reaction conditions for specific substrates, she says. To this end, Merck is ‘very open’ to collaborating with other companies and research groups working on collating databases of reactions, Trice says.

One of those could be Deepmatter. The company – which was spun out of the University of Glasgow on the back of work by Lee Cronin – is building a database of chemical reactions, which chemists can feed into, review, and reproduce.

At its core, Deepmatter transforms chemistry into code, says chief executive Mark Warne. But there are complex layers around this principle. The company makes devices that record as much laboratory data as possible. A multi-sensor probe sits inside the reaction vessel and monitors temperature, pressure, UV light levels, even sound and video, tracking a synthesis as it unfolds. An environmental sensor records ambient conditions, if appropriate, for example in the fume cupboard. Data from external hardware such as stirrer plates can also be recorded. 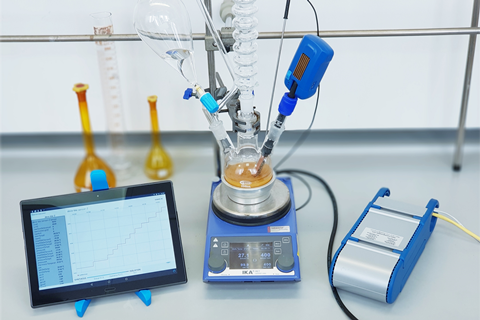 The data is stored in the cloud alongside each process carried out during the reaction. Alongside the data collection, Deepmatter runs a digital chemistry protocol that encodes reactions into ‘recipes’ to make them easily reproducible. Software allows chemists to review the data, analyse reactions and compare them to other reactions and different conditions.

This idea of recording as much data as possible, with the aim to collate and share it, is unusual in chemistry, says Warne: ‘No one has yet taken the approach to find value in unsuccessful reactions.’ First and foremost, Deepmatter wants to drive reproducibility. Chemists will be able to share their data easily – with colleagues, clients, scientific journals, or students – and allow them to recreate a successful experiment, or tweak an unsuccessful one.

Storing this much data in the cloud might trigger confidentiality fears in industry. But the company maintains proprietary silos on the platform, where companies can keep their data private. Those willing to share their data can upload it to the public silo, and improve outputs in chemistry along the way, Warne says.

Eventually, Deepmatter wants to apply machine learning to its coded database, and open up new areas of discovery. In addition, a huge database, combined with artificial intelligence (AI), could provide a route to automating repetitive lab tasks, Warne says: ‘The bridge from guiding chemistry to controlling chemistry is not a big one, and I think there will be a greater degree of automation in chemistry in a few years.’

That is, in the end, what AI is good at today: automating routine tasks, says Immanuel Schweizer, head of AI research at Merck. Schweizer’s research group is developing new algorithms and bringing state-of-the-art AI to different uses at Merck, including molecule discovery.

His team is using techniques based on reinforcement learning – a type of dynamic programming that trains algorithms through trial and error – to create an AI agent that could speed up discovery by training on a chemicals database and generating new molecules that adhere to certain properties, Schweizer says.

This system wouldn’t replace a chemist, he adds. Rather, it would spit out suggestions for molecules that the scientist could filter and develop further. Eventually, tools like these will change the way chemists work, Schweizer predicts, adding that it is hard to say how this will affect the chemicals industry.

One day, with the right tools and scientists available, digitisation might unlock chemical space which is not yet explored, Lapkin says. ‘We could have access to many new structures much faster. It may be that we will uncover a huge universe of medicinally active molecules and cure diseases. We might be able to properly uncover the rules of chemistry, and then our understanding of the field will progress a lot faster than we were able to do over the last 200 years,’ he says.