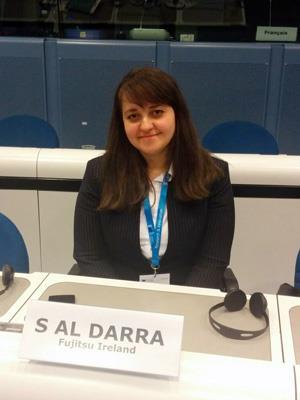 ‘I never wanted to leave my country. I had my future all planned out there.’

Suad Al Darra is a software developer at Fujitsu, based at the tech giant’s offices in Galway, Ireland. But until the outbreak of civil war in Syria in 2011 she lived a normal, happy life. As the conflict escalated, she and her husband were forced to flee their home and head to Egypt, hoping to start afresh. But one month after they entered the country, the new government decided to close its borders to Syrians. The pair found themselves in limbo – unable to renew their visas, unable to return to their war-torn home. Their options were limited: find a job, stay put and risk deportation, or try to reach Europe illegally.

Al Darra’s story will be familiar to many Syrians – the number of registered refugees in camps across Europe is approaching five million, and every day thousands continue to leave the country. Many are highly skilled and educated, forced to leave good research positions and jobs within the country’s once-thriving industries and universities. While some have been able to find similar positions in neighbouring Turkey, or enrol as overseas students at Europe’s universities, huge numbers of established researchers face almost insurmountable difficulties as they search for a new position and a new life far away from home.

‘I was applying everywhere in the world for a job but I never got a reply from any company, and I knew the reason was my nationality,’ says Al Darra. She and her husband were able to make ends meet by working as freelance web developers, but lived in constant fear and uncertainty for nearly a year. Eventually, a friend who worked at Fujitsu gave her a tip-off about the Ireland job, which she applied for and was offered after passing a series of Skype interviews. For the past few years she has been happily settled in Galway, but she knows there are thousands of others in impossible situations.

‘I have a lot of friends who refuse to go through the [illegal] immigration route and who are looking for opportunities to start over but it is not easy at all,’ she says. ‘Most of the times their applications will be overlooked.’

With the war in Syria showing no signs of reaching a resolution any time soon, leaders across Europe are working to introduce systems that will help fleeing researchers overcome some of the hurdles they face.

[[I believe refugees’ applications need more consideration, as many refugees lost their university degree papers during their migration process]]After getting her offer from Fujitsu, Al Darra was able to get some assistance from the European commission through EURAXESS – Researchers in Motion, an initiative that provides information and support services to researchers looking for jobs in Europe. They helped her deal with the immigration authorities and secure a visa for her husband, who she had to temporarily leave behind in Egypt.

In October last year, EURAXESS set up a dedicated project called science4refugees, which helps match up displaced researchers with potential employers by allowing those offering placements to highlight that they are willing to accept applications from those with refugee status. However, this gets no extra funding or help on top of the existing budget for EURAXESS, a commission spokesperson told Chemistry World, and is is only available to people who have already secured the right to work in the EU. It also considers refugees on an equal footing with non-refugees, which Al Darra believes is problematic.

‘I know [it] is meant for fairness, but I believe refugees’ applications need more consideration, especially in terms of providing university degrees and paperwork as many refugees lost those papers during their migration process or due to the war situation in certain places in Syria,’ she explains.

An inability to produce their qualifications can be a major obstacle for displaced researchers. One solution that could help has been suggested by the Norwegian Agency for Quality Assurance in Education (NOKUT). The body recently joined with their UK counterparts to propose a Europe-wide qualifications ‘passport’ system tailored for refugees in the EU. Under the proposal, an individual could submit information about their education and qualifications to a central body. ‘Key information about foreign qualification[s] would be decoded and presented in the [passport] by the qualified credential evaluator so that it could be easily read and understood by any recipient in any European country,’ says Stig Arne Skjerven, director of foreign education at NOKUT. He says a Norwegian pilot, which has seen 20 qualification passports issued to refugees so far, has been a ‘success story, warmly welcomed by the refugees … employers, educational institutions and integration authorities’.

Apart from these large-scale initiatives, most support for refugees is piecemeal and tends to exist as small scale in-country projects. Various UK universities, including Warwick, York and the London School of Economics, have announced scholarships or bursaries to support academics displaced by war, but some say there needs to be a more co-ordinated effort. Last year the Campaign for the Public University lobby group called on UK universities to commit to offering at least five scholarships or bursaries to undergraduate, postgraduate and postdoctoral students who have been forced to flee their home country.

In Germany, which is experiencing a more rapid influx of refugees, there are signs of a stronger nationwide response. Many universities are offering courses for refugees, and large companies – including chemical giant BASF, engineering firm Siemens and carmaker Daimler – are offering training placements and apprenticeships to help skilled migrants transition to life in the country. 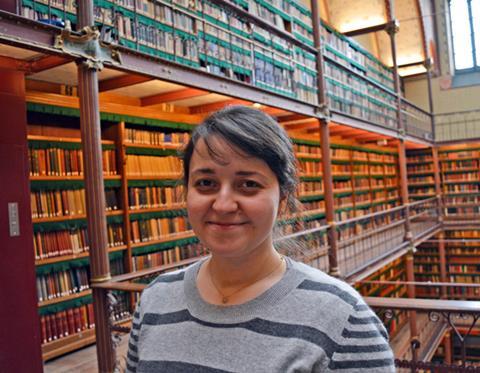 ‘When I came to Galway, I was stressed from the war, worried about the future, lost and heartbroken,’ says Al Darra. ’But a few months later I recovered.’

‘There is a great variety of initiatives and companies which offer programmes – the problem is there is a lack of information between refugees, companies and universities,’ says Carmen Bachmann, a researcher at Leipzig University in Germany. To try and address this she set up Chance for Science – an online networking platform that connects refugees with members of the German research community who are happy to share advice.

As well as providing information on training and employment opportunities, the platform aims to help displaced researchers stay abreast of research developments in their field. ‘Sometimes refugees have to wait years before they can work again … and if you don’t stay in your subject, reading and writing articles, you forget things you learned before,’ says Bachmann.

At the moment the project is run on a shoestring. The website was built by a student, and Bachmann herself visited refugee camps in Germany in September 2015 to reach out to Syrian academics. She says the project has received some great feedback so far, but it is under-resourced, being almost entirely run on a voluntary basis by two people.

‘It has a lot of potential but right now I need some funding to make it bigger,’ says Bachmann. She suggests this could come from the German government, or companies looking to promote their training initiatives.

Getting the word out

The site also suffers from a lack of visibility – so far only about 50 of its 400 members are refugees, Bachmann says. This is a problem that affects the science4refugees project too, and the commission has reached out to refugee researchers across Europe – including Al Darra – to help find new ways to get the message out. ‘Science4Refugees is a great initiative to connect refugees with opportunities, [but] it still needs some improvement in reaching the targeted audience,’ Al Darra says. ‘We are working currently on that to make this kind of information available for people through social media and to translate the website to Arabic.’

While there has been much progress in a relatively short space of time, Europe is struggling to keep pace with the scale of the refugee crisis and it is clear that more robust, long-term, securely funded strategies are needed. There are signs that Europe’s leaders are starting to recognise this. The commission recently invited Al Darra and Bachmann, among others, to a conference to discuss how research fits into the ongoing refugee crisis.

For Al Darra, who spoke about some of her experiences, reliving the past is difficult. But unlike so many others, she is now in a place of security and can start to look ahead. ‘When I came to Galway, I was stressed from the war, worried about the future, lost and heartbroken,’ she says. ‘But a few months later I recovered … the city is charming, a lot of things are going on and it is not that hard to be part of its community.’

‘I feel so lucky ending up here.’