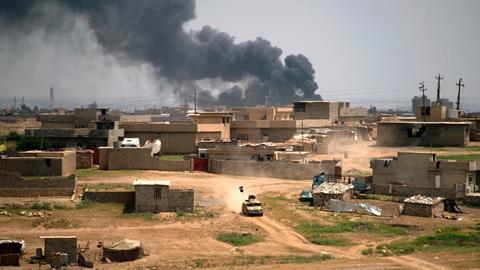 It sounds like the plot of an action film, but a chemist at a Swedish university organised a daring rescue of her Iraqi doctoral student and his family after they became trapped in an Islamic State (IS) war zone. The rescue took place in 2014 but has only recently come to light.

In 2014, Firas Jumaah was working on supercritical fluid chromatography and mass spectrometry of natural products under the supervision of analytical chemist Charlotta Turner. But in early August that year, Jumaah dropped everything and left for Iraq. His wife and two children had travelled to their hometown in Dohuk in northern Iraq for a family wedding when Isis went on the offensive, threatening the lives of people in that region. ‘My wife was panic-stricken, the actions by IS shocked everyone,’ Jumaah said. ‘I took the first plane there to be with them – what kind of life would I have if something happened to them and I was not there?’

Jumaah and his family are Yazidis, an ethno-religious group that has suffered brutal persecution by Isis who declared them devil worshippers. In August 2014, Isis captured a town in Iraq’s north, forcing 50,000 Yazidis to flee to the nearby mountains. Isis murdered, kidnapped and enslaved many of those remaining in the region. ‘I followed the news and got really worried, thinking about him all the time,’ says Turner.

Together with many other Yazidis, Jumaah and his family were hiding in a disused bleach factory. But food and water were quickly running out in the 45°C summer heat. Gunshots could be heard outside as Isis troops surrounded the town.

‘At that point I had no hope, I was desperate,’ Jumaah told Swedish public broadcaster Sveriges Radio. He sent a Turner a text message, explaining his situation and asking her to remove him from the doctoral programme if he hadn’t returned within a week. ‘I called him – which was weird because it was such a clear phone line even though he was there, in the middle of the war,’ Turner recalls. ‘[Jumaah] was so sad; he sounded like he had given up already.’

Turner was shocked – and furious. ‘What was happening was completely unacceptable, I was so angry that [Isis] had found its way into our world, exposing my doctoral student and his family to this and hindering the research.’ She got in touch with the dean of the chemistry faculty, who put her in touch with the university’s chief security officer, Per Gustafson.

‘He’s very professional,’ says Turner. ‘He’s always ready, behaving like some kind of James Bond and people are almost mocking him because there’s never anything happening – Lund University is a very peaceful place.’

Within a few days, Gustafson had hired four armed security guards in Iraq. Using two 4x4 vehicles, they reached Jumaah’s hideout on 18 August. Dressed in bulletproof vests, the family endured a six hour ride along tiny mountain roads – all the major roads were closed – to Erbil airport. There, they boarded a plane to Turkey and then on to Sweden.

‘I have never felt so privileged, so VIP,’ said Jumaah ‘At the same time, it was difficult and I felt like a coward because I left my mother and siblings behind.’ Although both his mother and siblings escaped, it took them several years to rebuild their destroyed houses and return to a normal life.

‘After everything that happened, I have friends who believe I was a secret agent, they cannot believe a professor in Lund had the power to rescue a normal doctoral student,’ Jumaah said. ‘People have told me I’m naïve, but I just wanted him home and to be safe in Lund,’ explains Turner. ‘He’s part of my research group – we’re almost like a family.’

Back in Sweden, Jumaah threw himself into his work with renewed energy. ‘When he came back, Firas was a completely different person,’ recalls Turner. ‘He was brilliant, extremely motivated, nothing was difficult anymore.’

Jumaah has now finished his thesis, publishing five papers in the process. His work has contributed to the group’s goal of understanding how vitamin D is stored in the body. He is now working for a pharmaceutical company near Lund and has been granted permanent residency in Sweden as returning to Iraq is not currently an option.

Jumaah and his family are also repaying Lund University for the rescue. Although the exact costs of the rescue haven’t been disclosed, taking the family out overland was the cheaper of several options that included flying the family out in a helicopter.

Turner has stood up for her students on other occasions. At a conference, two Sudanese men threatened her postdoc – also a Sudan national – because of the way she dressed. A complaint to the conference organiser quickly shut them down. ‘To me, it’s totally unacceptable if these kind of things interferes with our research,’ says Turner. ‘In my group we talk a lot about values, that we should respect each other and that we all count as equal. Research has nothing to do with religion or where you’re from.’