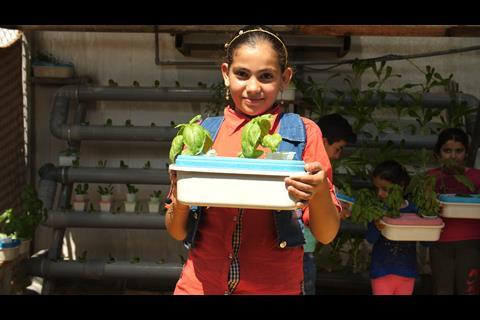 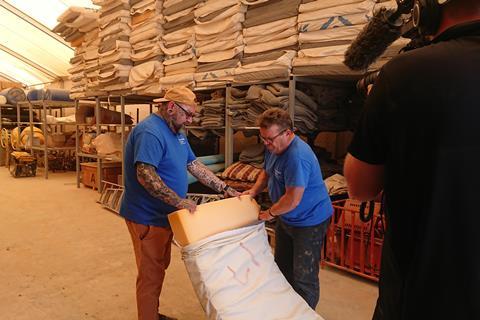 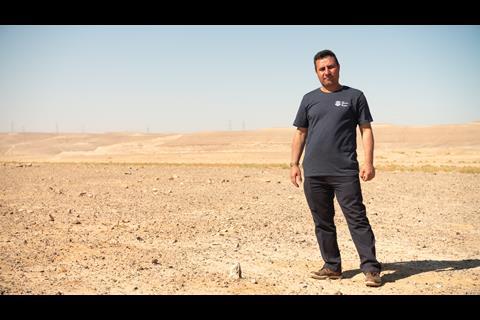 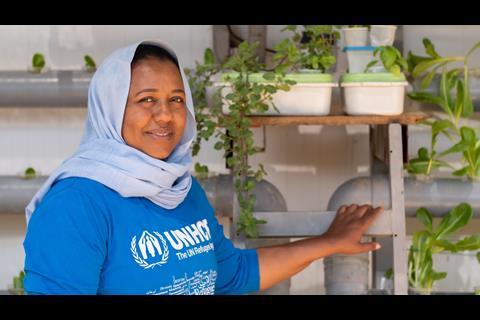 Rehab Osman Khalifa, one of the community services officers at Zaatari camp, showing off some of the plants grown at the camp

At the Zaatari camp in the middle of the Jordanian desert something remarkable is happening. Despite poor soil and a lack of water, beds of flowers, herbs and vegetables are adding patches of colour to the otherwise barren backdrop. It’s the result of a project run by University of Sheffield scientists that is helping Syrian refugees grow fresh food, despite the desert’s arid conditions.

Zaatari currently shelters almost 80,000 people and is the world’s largest camp for people displaced by Syria’s devastating civil war. But with less than 20cm of rainfall each year, Zaatari’s ground is dry and infertile. The camp’s inhabitants, having left their old lives behind, rely on humanitarian aid to survive.

During a 2016 visit to Zaatari, Sheffield chemist Tony Ryan discussed recycling options with the UN officials running the camp. ‘They took me into a big warehouse and said “We haven’t got a clue what to do with these”,’ recalls Ryan. He describes his mounting excitement as he realised the old mattresses were made of polyurethane. Ryan knew from his research on polymer foams that polyurethane makes a good support for plants. After taking a sample back to his Sheffield lab for safety testing, Ryan and his colleagues returned to Zaatari to launch the Desert Garden project.

Desert Garden trains people in hydroponics and provides them with materials they need to grow crops. Recycled mattress foam is used as a synthetic soil and nutrient solutions are used in place of solid fertilisers, which are banned at the camp. The technique allows people to grow plants using significantly less water than would otherwise be needed in the arid climate.

Many of Zaatari’s residents have arrived from Daraa, an agricultural region of Syria, explains Ryan. ‘The camp’s 12km from the Syrian border and basically is full of Syrian farmers,’ he says. ‘So we showed them how you might grow things using polyurethane and by the next time we came back, they’d built a hydroponic greenhouse.’

The recruitment of native Arabic speakers, including Ryan’s colleague Moaed Al Meselmani, a soil scientist who is himself a Syrian refugee, helped spur the project on. ‘It has migrated from University of Sheffield employees doing the training, to Syrian refugees teaching each other how to do it. And it’s really taken off now – we’ve trained about 1000 people,’ says Ryan.

Empowered by the training, Zaatari’s residents have successfully combined the Sheffield scientists’ techniques with their own farming know-how. ‘Now we learn more from them about how to grow things in foam than they ever learned from us,’ says Ryan. ‘They’ve been growing things that we’ve never grown.’ To date there have been crops of lettuce, chillies, cabbage, cucumbers, courgettes, aubergines – ‘basically the whole salad and herb bar’, says Ryan.

The Desert Garden appeal is currently seeking donations to help support the project. £10 will provide plants and nutrient solution for one family, while £25 provides enough fertiliser to grow 300kg of tomatoes. If the team can raise £250,000, they’ll be able to train and equip 3000 refugees and make the project self-sustaining within three years.

Beyond providing a bit of fresh food, the project offers a welcome distraction from the monotony of life in the camp. ‘The [UN High Commissioner for Refugees] absolutely love what we’re doing because they always have bored farmers,’ says Ryan. ‘They always have dirty mattresses, and growing things is really, really good for your mental health. It gives your life a purpose.’

Ryan points out that the training is giving people skills that they’ll be able to use for the rest of their lives and could potentially help them find work in horticulture. ‘There’s a real opportunity here for livelihoods. If you do hydroponics well, you can use 90% less water for the same food production,’ he says. ‘And in a country that’s as water scarce as Jordan, that’s a big advantage.’

With enough donations, Ryan hopes that the project can be taken to all of the refugee camps in Jordan and then potentially to camps in other countries. And he says that the lessons learned in Zaatari could even help make hydroponic agriculture in Europe more sustainable.

‘All it took was the sprinkling of a little bit of chemical science to allow a whole load of flowers to bloom in a desolate place,’ says Ryan. ‘And once we’d shared our bit of chemistry with the Syrian refugees, they went off and ran with it.’