Ancient copper was extracted by experts, not armies of slaves 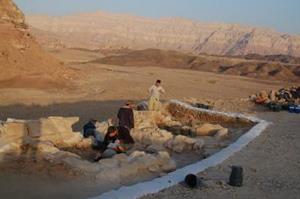 Archaeologists in Israel have found new evidence that Iron Age ‘chemists’ – metal smelters who could extract copper from its ore – dined on fine meat and fish, and were admired and respected for their ability to get valuable metal from lumps of rock.

The ‘Slaves’ Hill’ archaeological site in Israel – dating back to 10BC – was identified in the 1930s as a place where copper was extracted from its ore in clay furnaces. It had been assumed that this work was undertaken by slaves, but research led by archeologists at Tel Aviv University suggests the workers who manned the furnaces at this site were in fact highly skilled craftsmen who were respected, and possibly even worshipped, for their seemingly ‘magical’ abilities to turn stone into metal.

Animal remains found around the site suggest the smelters’ meals included the best cuts of meat – usually reserved for those with a high social status – as well as fish that would have been brought hundreds of miles from the coast.

Copper was a hugely important material at the time, and was used to make tools and weapons. It was extracted from its ore by heating it to 1200°C in a furnace with a reducing agent such as carbon, usually in the form of charcoal. The ancient chemists who knew how to do this, the researchers say, were in a powerful position.