Iron found in ancient rock is recycled from bacteria 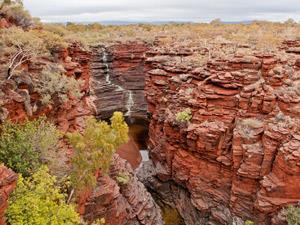 Isotopic analysis suggests that some of the iron within rock formations was processed by bacteria 2.5 billion years ago

Researchers in the US have shown that ancient bacteria may have played an essential role in creating iron deposits found in rock formations. This challenges the widely held view that the iron comes solely from vents in the Earth’s crust, and suggests that iron metabolism was an important part of early life on Earth.

Banded iron formations (BIFs) are sedimentary rocks containing repeating layers of colourful iron oxides, which formed in the oceans between 4.6 billion and 540 million years ago. But quite how the iron got there in the first place has been a matter of debate. The most widely accepted model focuses on soluble Fe(II) spewed up from hydrothermal vents in the sea bed. It is supported by the isotopic composition of certain rare elements in BIFs, such as europium, that correspond to that of the hydrothermal fluid. However, this does not explain the large variation in isotopes of the iron itself, so some researchers have proposed that the iron may have been recycled by metabolic processes inside bacteria, and carried across land by rivers.

‘In the beginning, [my supervisor and I] had different views on how to interpret the iron isotope data,’ says Weiqiang Li, formerly of the University of Wisconsin-Madison. ‘I was always a little conservative and hesitant to say it was biological, because there were alternative explanations.’ To investigate further, Li and his colleagues decided to include neodymium isotopes, which vary with geological origin.

The combined iron–neodymium data set provided two groups of correlating isotopes: one corresponding with hydrothermal systems and the other with continental rivers. ‘By introducing the mechanism of biology, the microbes recycling iron brought in by the [continental] rivers, we can essentially explain all the geochemical signatures that we observe. Before it was all a little awkward,’ says Li.

The finding fits with a growing understanding about iron on the ancient Earth. ‘The current energy system is based on carbon, but 2.5 billion years ago, iron played a similar role to carbon now,’ says Li. Andreas Kappler from Tübingen University, Germany, who wasn’t involved with the study, agrees: ‘This paper convincingly demonstrates that an active biogeochemical iron cycle was functioning already on ancient Earth,’ he says. ‘It suggests…we need to consider microbial Fe(III) reduction as an important metabolism that was involved in BIF formation.’