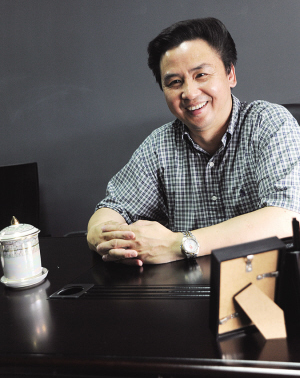 Liming Dai is a professor in the department of macromolecular science and engineering at Case Western Reserve University (CWRU), US. He is also director of the Center of Advanced Science and Engineering for Carbon (Case4Carbon). Dai’s expertise lies across the synthesis, chemical modification and device fabrication of conjugated polymers and carbon nanomaterials for energy-related and biomedical applications.

You’re the director of the Center of Advanced Science and Engineering for Carbon (Case4Carbon). What are the aims of the centre and what does your role involve?

The Case4Carbon, which resides in the Case School of Engineering, is not only just a research center at Case but also an interdisciplinary research alliance among multiple universities, national laboratories and industrial partners. The Center is a world-renowned research center dedicated to advances in all aspects of science and engineering for carbon. Our mission is to pursue an integrated science and engineering program by using emerging carbon nanotechnology to develop new materials, devices and systems. One of our unique strengths is to apply advanced synthetic methods to develop advanced carbon nanomaterials with well-defined, multidimensional structures for multifunctional applications, including energy conversion and storage and biomedical devices.

As the founding director, I am the primary person who is responsible for the daily operation and future development of the Center. My role includes leading multidisciplinary teams, directing the research programs, and facilitating technical and financial planning and reporting both technically and administratively.

Can you tell me about one of the current projects at Case4Carbon?

One of the current projects at Case4Carbon is the US Department of Defense (DOD) MURI (Multidisciplinary University Research Initiative) program on 3D carbon nanomaterials with a total funding of $7.5 million (£4.7 million).

Carbon nanomaterials, including one-dimensional carbon nanotubes (CNTs) and two-dimensional single atomic layer graphene, have been demonstrated to show superior thermal, electrical, and mechanical properties. Due to their dimensionally confined structures, however, these 1D and 2D nanomaterials exhibit strong direction-dependent thermal and electrical transport properties with extremely low out-of-plane conductivities. The objective of this MURI program is to extend the unique properties of these nanostructures to the critical third dimension by assembling nanotubes and graphene sheets to fabricate tunable three-dimensional nanoporous hybrid architectures possessing unique thermal, electrical and mechanical properties in all three dimensions.

The nanofabrication efforts will be complemented by detailed chemical and multiscale microstructural analysis as well as physical property evaluation. Multiscale-multiphysics modeling and simulation tools will be developed to provide guidance to the design of the 3D material architectures, protocols for their synthesis and assembly, structure–property optimisation and process scalability. With 3D nanoscale porosity, large surface area and exceptional mechanical and transport properties, these nanostructures are promising for numerous applications, including new materials for energy conversion and storage, thermal management, nano and microscale integrated devices, multifunctional materials for aerospace systems, security sensors and biomedical sensors, to name a few. 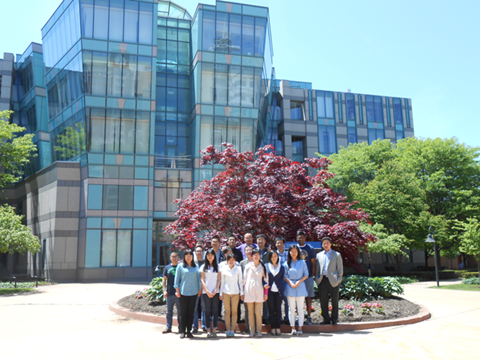 Liming Dai ahd his group outside the Kent Hale Smith Building, home of the department of macromolecular science

Is there a particular question you are trying to answer in your lab at the moment?

With the recent developments in nanoscience and nanotechnology, a large variety of single-component nanomaterials – for example carbon nanotubes and graphene – and devices have been reported. Owing to their unique electronic properties and multi-dimensional structures, carbon nanomaterials offer particular advantages as advanced electrical (molecular) wires to power biomedical implants and/or stimulate biological systems – for example the nervous system. There is now a pressing need to integrate multicomponent nanoscale entities into multifunctional systems and to develop nano–bio interfaces to connect these nanosystems in vivo to the micro and macro world, which is one of the challenging problems we are addressing in collaboration with colleagues.

You’ve done a lot of work on flexible supercapacitors. What kind of situations are they for?

Supercapacitors, also called as ultracapacitors, are electrochemical energy storage devices that combine the high energy storage capability of conventional batteries with the high power delivery capability of conventional capacitors. Being able to achieve higher power and longer cycle life than conventional dielectric capacitors and batteries, supercapacitors have been developed to provide power pulses for a large variety of applications, ranging from consumer electronics through hybrid electric vehicles to industrial electric utilities.

On the other hand, flexible energy storage devices are essential for the development of flexible and wearable electronics, including roll-up and bendable displays, portable electronic papers, and wearable personal multi-media. Besides, it is highly desirable to have energy storage devices that are not only flexible but also mechanically stretchable and optically transparent for many other applications, ranging from self-powered rolled-up displays to self-powered wearable optoelectronics. While a transparent supercapacitor is desirable as integrated power sources for smart displays and windows in buildings, automobiles and aerospace vehicles to be both functional and aesthetic appeal, its stretchability can ensure a stable performance even under unpredictable mechanical deformations – for example bending and stretching. In this context, we, along with others, have developed some flexible, stretchable, and even transparent all-solid-state supercapacitors with in-plane, fibre-shaped and integrated structures.

Why does graphene work well in flexible supercapacitors?

As a building block for carbon materials of all other dimensionalities – for example 0D buckyballs, 1D nanotubes and 3D graphite – the two-dimensional single atomic carbon sheet of graphene has quickly emerged as an attractive candidate for energy storage, particularly in flexible supercapacitors, due to its unique structure and properties, including the largest specific surface area (2630m2g–1) among all carbon materials, excellent electrical conductivity (106Scm–1), high electrochemical stability, low optical absorbance (2.3%), great mechanical strength and unusal flexibility.1

Although graphene sheets with a large surface area are ideal electrode materials for supercapacitors, much of the graphene surface area is lost due to restacking via a strong p–p interaction. Therefore, it is highly desirable to physically separate 2D graphene sheets to preserve the high surface area intrinsically associated with individual graphene sheets. In this regard, we have used a solution layer-by-layer self-assembling approach to prepare multilayered hybrid carbon electrodes with alternating graphene and CNT layers. These well-defined interlayers of CNT networks not only enhanced the mechanical strength of the electrode but also allowed for a fast ion diffusion and efficient electron transport.

Most supercapacitors pack a powerful punch, but don’t last long; whereas their battery cousins last longer, but can’t deliver a big boost of energy quickly. Recently, an international team involving us has developed a flexible, fibre-like supercapacitor with both high-power density and high-energy density, making it durable and powerful.2 A flexible fibre made from a tightly packed network of graphene and carbon nanotubes that could be woven into clothing to power medical implants or communications devices, the supercapacitor boasts the highest-reported energy storage capacity – or energy density – by volume for a device of its kind, rivaling some thin-film lithium batteries, which typically dominate the market when it comes to storage capacity.

What else are you doing with graphene at the moment?

Owing to its unique structure and properties, graphene has emerged as a star member of carbon family for energy applications. Like other materials, however, a graphene-based material that possesses desirable bulk properties may not be always possess the surface characteristics required for specific applications. Therefore, surface functionalisation is essential.3 Along with other researchers, we have devised various covalent and non-covalent chemistries for making graphene materials with both the bulk and surface properties needed for efficient energy conversion and storage devices, such as solar cells, fuel cells, and batteries in addition to supercapacitors. Of particular interest, we have discovered a class of heteroatom-doped carbon nanomaterials (e.g., carbon nanotubes, graphene), which, as metal-free alternative catalysts to replace platinum, could dramatically reduce the cost and increase the energy conversion efficiency.3,4

In collaboration with Jong-Beom Baek at Ulsan National Institute of Science and Technology (UNIST) in South Korea, we have also developed a simple, but very effective, ball-milling method for low-cost, large-scale production of high-quality heteroatom-doped carbon-based catalysts.4,5 This ball milling method has been considered as a ‘great leap forward technology’ for large-scale and low-cost production of carbon-based metal-free catalysts. 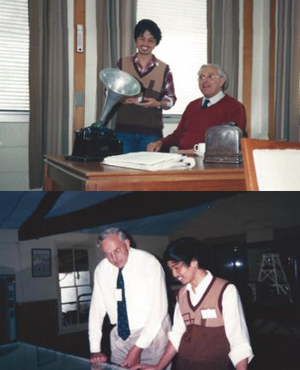 Who inspired you to become a scientist in the first place?

As the youngest in my family, one of my elder brothers introduced me to science when I was at elementary school. However, it was only by chance that I became a professional scientist. Back in my native Hangzhou in 1986, I happened to have a course taught by an English teacher who came from Australia. One day, the teacher had us to complete application forms for Australian National University (ANU) PhD scholarships as a classroom exercise. To my pleasant surprise, the teacher forwarded the application form that I filled in to ANU in Canberra and I ended up doing my PhD in the group of John W White in the School of Chemistry at ANU.

What’s the secret to being a successful scientist?

There is no secret apart from working hard, thinking critically and having an open mind and a warm heart towards collaborations.