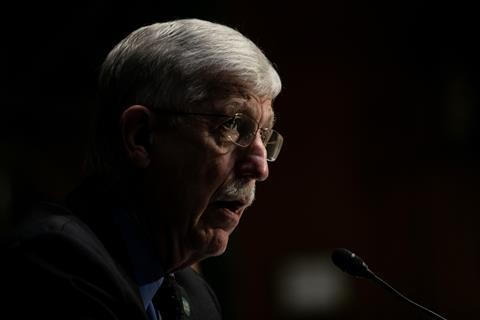 After heading the National Institutes of Health (NIH) for over 12 years under three US presidents, physician-geneticist Francis Collins has announced that he will leave by the end of the year.

Collins is the longest serving presidentially appointed director of the NIH. ‘I am proud of all we’ve accomplished. I fundamentally believe, however, that no single person should serve in the position too long, and that it’s time to bring in a new scientist to lead the NIH into the future,’ he said in a 5 October statement.

Former President Barack Obama appointed Collins to lead the NIH, which has a budget of $41.3 billion (£30 billion), in August 2009, and Donald Trump and then Joe Biden asked him to remain in place. Previously, he ran the NIH’s National Human Genome Research Institute (NHGRI) from 1993 to 2008, where he spearheaded the international Human Genome Project, which was completed in April 2003. After stepping down as NIH director, Collins will continue to lead his lab at the NHGRI, which is pursuing genomics, epigenomics and single cell biology to elucidate the causes and prevention of type 2 diabetes, among other research.

Under Collins’ tenure, the NIH’s budget grew by 38%. More recently, he worked with the Trump and Biden administrations to address the Covid-19 pandemic, helping to launch, for example, a public–private partnership that developed a coordinated research strategy to prioritise and speed development of promising treatments and vaccines against the virus. While at the helm of the NIH, Collins also prioritised the need to address sexual harassment and structural racism in science, as well as efforts to ensure broad data sharing.