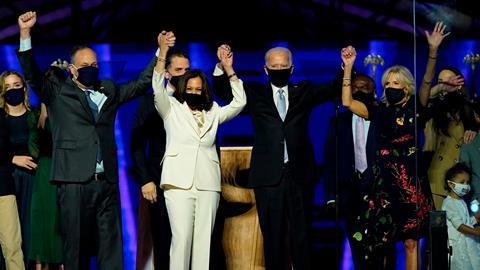 Biden thrills US research community with his science ‘dream team’

The new US president Joe Biden has named several preeminent researchers to his science team and raised the status of the presidential science adviser to a cabinet-level position. The news has thrilled science groups and research advocates across the country.

Just days before his 20 January inauguration, Biden announced key members of his White House science team, including Eric Lander, a geneticist who currently serves as the president and founding director of the Broad Institute at the Massachusetts Institute of Technology (MIT) and Harvard University, as his pick for science adviser.

If confirmed by the Senate, Lander will also become director of the White House Office of Science and Technology Policy (OSTP). Biden has made the decision to promote this position to a cabinet-level one for the first time in the post’s history.

‘Elevating Eric Lander’s position as director of the Office of Science and Technology, essentially the president’s science adviser, to the cabinet, is important not only symbolically but in terms of getting things done,’ Neal Lane, a physicist who served as science adviser to former president Bill Clinton and as director of the US National Science Foundation, tells Chemistry World. Increasingly, he says, all important federal policy matters involve science and technology and the US is slipping behind other nations like China in that arena.

‘Giving Dr Lander cabinet rank is a great signal to the public about the importance that President Biden will attach to science and technology in his administration,’ adds John Holdren, who was President Obama’s science adviser and director of the OSTP. ‘In reality, though, cabinet rank is just one among the three top designations that confer status on the White House officials that hold them, and, on the inside, it is arguably not the most important. The other two are Senate confirmation and the rank of assistant to the president. Dr Lander will have all three.’

Holdren points out that having the rank of assistant to the president is ‘critical’. There are fewer assistants than officials with cabinet rank, and assistants typically have better access to the president, though this is not generally well understood by the public, Holdren notes. ‘Dr Lander’s being the first OSTP director to hold [cabinet] rank does indeed send an important external message and, if it provides a bit of extra oomph on the inside, too, that is all to the good.’

Finally at the table

‘Previous science advisers have had good relations with cabinet secretaries, certainly that was my experience, but there is a difference between sitting at the … table with the president, vice president and other members of the cabinet and sitting next to the wall,’ Lane adds.

Ben Corb, a spokesman for the American Society for Biochemistry and Molecular Biology, agrees. He says Obama’s long-time science adviser and OSTP chief John Holdren may have been invited to all cabinet meetings but he was never confirmed by the Senate as a cabinet-level appointee. ‘It may have been a courtesy but not a formality,’ Corb explains.

It took President Trump more than 550 days in office to nominate his science adviser and OSTP head, Kelvin Droegemeier. Before his presidency even began, and increasingly throughout it, Trump was criticised for what’s been described as a strong anti-intellectual streak, and for downplaying the role of evidence and data in policymaking.

In order to assume his new duties, Lander will take a leave of absence from MIT, where he is a biology professor, and the Broad Institute, which he has run since its inception in 2004. Lander also helped lead the Human Genome Project and, under former president Barack Obama, co-chaired the President’s Council of Advisors on Science and Technology (PCAST), which advises the US president on science and technology issues.

Biden has also announced that chemist Frances Arnold from the California Institute of Technology – winner of the 2018 chemistry Nobel prize for her ground-breaking work on directed evolution of enzymes – will co-chair the new president’s PCAST. Leading the panel with her will be Maria Zuber, a geophysics professors at MIT who will continue to serve as the university’s vice president for research – a position she has held since 2013. Arnold and Zuber will be the first women to ever co-chair the high-profile council.

Among other notable science personnel appointments under Biden, doctor and geneticist Francis Collins will continue in his role as director of the National Institutes of Health, the biomedical research agency that he has run since 2009. America’s top infectious disease expert, Anthony Fauci, will serve as Biden’s chief medical adviser, and David Kessler, who headed the Food and Drug Administration during the administrations of George Bush senior and Bill Clinton, will become chief science officer for the White House Covid-19 response team.

Biden will also nominate the secretary of the North Carolina Department of Environmental Quality, Michael Regan, to lead the Environmental Protection Agency. If confirmed by the Senate, Regan, who as North Carolina’s top environmental official ordered Chemours to stop pollution of North Carolina’s waterways with per- and polyfluoroalkyl substances, would be only the second African American person to direct the agency.

The chief executive of the American Association of the Advancement of Science, Sudip Parikh, said via Twitter he is ‘thrilled by the dream team of scientists’ that will be leading the US for the next four years.

‘Science will be at the forefront of my administration – and this group will ensure everything we do is grounded in science, facts, and the truth,’ Biden tweeted on 16 January. ‘Tune in as I introduce members of my science team.’