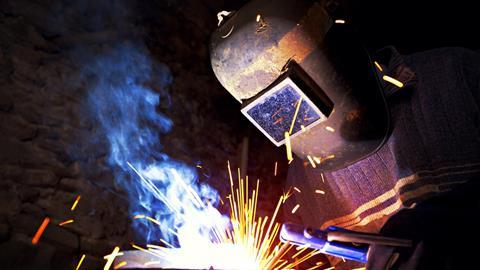 Manganese exposure puts welders at risk of Parkinson’s, even at low levels

The greater the exposure of welders to airborne manganese, the more quickly symptoms of Parkinson’s disease progress

Welders exposed to airborne manganese at levels below federal occupational safety standards exhibit neurological symptoms similar to Parkinson’s disease, according to researchers at Washington University in Missouri, US. The team, led by neurologist Brad Racette, also observed a dose response between exposure to manganese-containing welding fumes, and the onset and worsening of the disease.

The average age of the 886 welders included in the study was 45 years, and Racette’s team determined that at least 15% presented with clinically significant Parkinson’s disease symptoms. ‘It would be extremely rare to see Parkinsonism in any worker in their 40s, and so the fact that we are seeing 15% in this population is a striking number,’ he tells Chemistry World. In the average population of the same age, only a fraction of a percent would fall into the Parkinsonism category, Racette states.

The US Occupational Safety and Health Administration (OSHA) has set a voluntary safety standard of 1mg of manganese per m3, and the American Conference of Governmental Industrial Hygienists has recommended a limit of 0.02mg.

However, Racette warns that the US’s current federal safety standards may not adequately protect welders, and says more stringent regulations may be needed. He points out that employers are not required to keep worker exposure to manganese at or below specified safety levels, and suggests that reducing OSHA’s allowable levels of manganese would likely make a big difference in welder health.

Keith Josephs, a neurologist at the Mayo Clinic in Minnesota, says: ‘We need to protect these welders – some are welding in confined spaces without any protection at all.’ He notes that these workers require proper ventilation as well as masks and other personal protective gear.

But others are more sceptical. Tomás Guilarte, an epidemiologist at Florida International University who also serves as dean of the school’s public health school, notes that Racette’s team claims that manganese exposure causes Parkinsonism in welders at a lower dose than the current guidelines, but the study participants’ doses are estimated from a job history questionnaire.

While there is no doubt that chronic manganese exposure produces Parkinsonism, Guilarte says Racette and his colleagues have no knowledge of the amount of respirable or non-respirable fractions, or the actual air manganese concentrations for any of the welders in their study. ‘They don’t have any empirical data,’ Guilarte states.

Nevertheless, Racette says his team’s findings are important and warrant attention to try to minimise the damaging neurological effects of manganese exposure on welders.