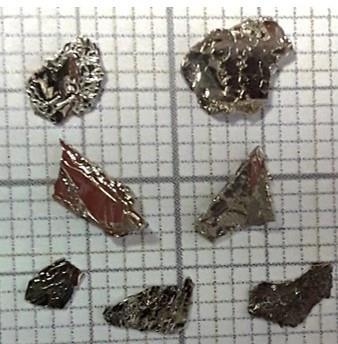 Researchers in the US have shown that adding magnesium to cerium cobalt (CeCo3) can transform it into a permanent magnet. The findings could help take the pressure off supplies of scarce rare-earth elements like neodymium and dysprosium, which feature in magnets in everything from earbuds and smart phones to car motors and power tools.

Neodymium iron boron (NdFeB) is the most commonly used type of rare-earth magnet and the strongest permanent magnet on the market. Thomas Lograsso at the US Department of Energy’s Ames Laboratory and his colleagues have used a number of approaches, including computational searches, theoretical calculations and high-throughput experiments, to look for alternatives to such high-powered rare earth element-containing magnets.

CeCo3 is non-magnetic despite containing 75% cobalt, which is among the strongest magnetic elements out there. Besides having this high cobalt content, which suggests a high degree of magnetism, the compound also has a non-cubic crystal structure that is anisotropic. ‘Our researchers then said to themselves, “this compound seems to have lost its way, so let’s rehabilitate it – let’s try to change its chemistry and make it ferromagnetic,”’ Lograsso recounted when he presented the work at the American Chemical Society’s Spring 2019 meeting in Orlando, Florida.

Looking through the literature, they saw reports of adding magnesium to CeCo3 for hydrogen storage, so they decided to take that approach. ‘The experimental results are in, and indeed it shows the features – it has coercivity, which is a measure of the resistance to demagnetisation, it shows a high enough magnetisation,’ Lograsso said.

He acknowledged that the material is not going to replace NdFeB permanent magnets, but said it could work in niche applications and maybe replace some low-end magnets.

Lograsso further suggested that the material could serve as what’s known as a gap magnet, as its performance sits between non-rare earth-bearing magnets and magnets that do contain rare earth elements. Developing such a gap magnet could replace anywhere from 10,000 to 20,000 tonnes of neodymium, he estimated. ‘Right now, if you are in the middle you have to use a rare earth,’ Lograsso explained. ‘This could be a potential displacement magnet that would give you an option not to use a rare earth.’

Correction: A quote was updated on 7 June 2019 as a word was incorrectly transcribed