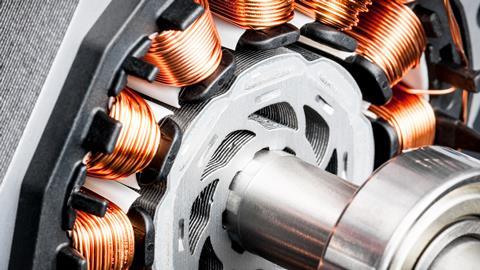 A rare-earth free magnetic material with similar properties to the rare-earth magnets found in everything from wind turbines to computer hard drives has been discovered by US researchers using a machine learning-guided approach. The material requires further development, but the demonstration constitutes an important step on the road to creating powerful magnets that aren’t dependent on rare earth elements.

Permanent magnets are crucial to the generation of electricity in hydropower, wind power and numerous other green energy technologies, as well as to information technologies. These devices need strong magnets with high coercivity – a well-constrained magnetic field. Making these requires a magnetic material with high magnetic anisotropy – a measure of the dependence of the magnetic moment on the angle of the lattice. ‘So far the magnets with high anisotropy have contained rare earths,’ says Cai-Zhuang Wang of the US Department of Energy’s Ames Laboratory at Iowa State University. ‘Why is a very fundamental question that’s not fully understood yet.’ Regardless of the mechanism demand for permanent magnets is set to grow as society moves to cut emissions by electrifying transport and industry. Magnets made from cheap elements such as iron will, therefore, be in high demand.

A material can only show good magnetic anisotropy if it has an anisotropic lattice structure, which rare-earths compounds often do. Iron–cobalt alloys, however, tend to be most stable in cubic structures. Researchers have tried to break this symmetry by adding a third element such as nitrogen to occupy the interstitial positions in the cubic lattice. They have often found, however, that the structures are insufficiently stable and decompose at high temperatures.

Wang and colleagues at the Ames Laboratory and elsewhere, funded by the National Science Foundation, looked at compounds containing iron, cobalt and boron using a combination of machine learning, density functional theory (DFT) and an ‘adaptive genetic algorithm’. They started with around 400 structures that, they calculated, would have negative energy of formation. They then trained a DFT algorithm using data from previous experiments with ternary iron–cobalt compounds to predict the maximum magnetisations and the magnetic anisotropies of various structures. Finally, they used their adaptive genetic algorithm to generate new structures from the most interesting candidates. ‘The simplest way is to take two structures and put them together like two parents,’ explains Cai-Zhuang.

After every stage, the machine learning algorithm found the energetic ground states of their new structures by DFT and calculated these ground states’ magnetic properties, before using this data to improve its subsequent predictions – picking out the most promising candidates then combining, optimising and calculating the new structures’ properties. ‘It’s a mimic of the evolutionary process,’ explains Wang.

The researchers thereby arrived quickly at the most promising compounds without analysing every single combination of the three elements. The researchers synthesised the most promising candidate, and found good agreement with their predictions. ‘I think this is the first demonstration of a rare-earth free magnet that does have high anisotropy,’ says Wang, ‘but the real magnet will be a lot more complicated than a single crystal, so this just opens the door and there’s a lot of work to be done.’

Ziyuan Rao of the Max Planck Institute for Iron Research in Düsseldorf is intrigued. ‘Many small countries in Europe, say, don’t have their own supplies of rare-earth elements, so this topic is very important,’ he says, ‘but it’s also very difficult, because rare earth metals can have very high coercivity and also very high magnetisation. I think it’s a significant paper.’

Update: The funder of the research was added 29 November 2022.