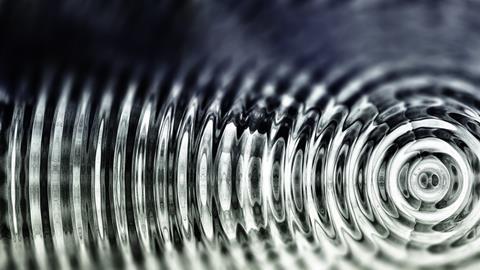 US scientists have discovered a novel way to order the tiny magnets that are the hydrogen protons in water molecules, which in our drinking glass are completely disordered. Mohsen Arabgol and Tycho Sleator from New York University (NYU) have showed that they can align proton spins by rotating them at very high speeds. They realised that a phenomenon known as the Barnett effect, first demonstrated in electrons in 1915, should also apply to protons. ‘What we had anticipated we should find, we ended up finding,’ Sleator tells Chemistry World. ‘Our idea was correct.’

Sleator explains that the idea sprung from a project partly funded by the US Defense Advanced Research Projects Agency. It sought to make a simpler, more portable, brain imaging probe than is possible with MRI. The idea was to send circularly-polarised x-rays to rotate molecules in the brain to try to align their hydrogen protons’ spins.

MRI machines and NMR spectroscopy instruments chemists routinely use are bulky because they contain large magnets to align protons. This alignment, or polarisation, is possible because protons have a magnetic moment, reflecting their magnetic field strength and orientation, the latter of which is better known as spin. This orientation only ever takes one of two values. Spins are therefore always either aligned in the same direction as the magnetic field used to measure them, or aligned opposite to that field.

The same is true of electrons, only their magnetic moments are around 700 times larger than protons. This is important when it comes to rotating samples, because there is a fundamental relationship between particles’ magnetic moments and the angular momentum of their rotation. In the early 20th century Albert Einstein and Wander Johannes de Haas realised that this meant that changing a body’s magnetic moment could make it rotate. Samuel Barnett demonstrated the opposite of this, showing that rotating metal rods on their axes could magnetise them by polarising electron spins.

Polarising spins in this way requires giving particles enough angular momentum. ‘If you have a sample, say of protons in water, that is rotating very fast, if a spin flips from a direction parallel to the direction of rotation to opposite to the direction of rotation, there is an exchange of angular momentum between the flipped spin and the bulk sample,’ Sleator explains. Rotating a sample fast enough can provide sufficient energy to partially align spins in one direction, partly overcoming the scrambling effect of heat energy. 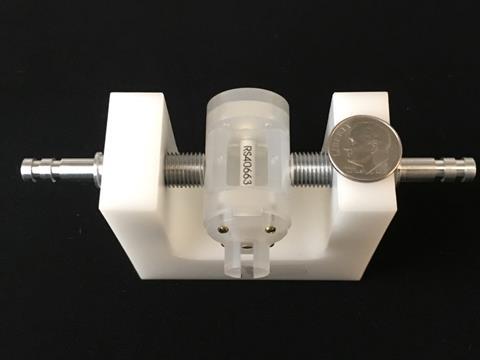 The high speed spinner made by Revolution NMR can rotate at an incredible 15,000 revolutions per second

The NYU scientists detected the outcome using NMR measurements, but rather than the usual big magnets they put the spinner between two inexpensive low-field ring magnets. The field was sufficient for them to detect the rotation-enabled magnetisation, but not to overwhelm it.

Meghan Halse from the University of York, UK, says that it’s ‘interesting that you can generate polarisation’ normally produced by a powerful magnetic field by just rotating a sample. ‘This is an unusual effect,’ she adds. She adds that the polarisation generated, even at the very high rotation speeds, is ‘quite weak and so this effect cannot readily replace the strong magnetic fields used in NMR/MRI’.

Sleator recognises that it’s unlikely that the nuclear Barnett effect could revolutionise MRI, calling the idea ‘pie in the sky’. Applications for the effect are not obvious right now, but he stresses that the same was initially true for electromagnetic induction, which today enables much of our electricity generation.