Mario Molina, who warned of CFC threat to the ozone layer, dies 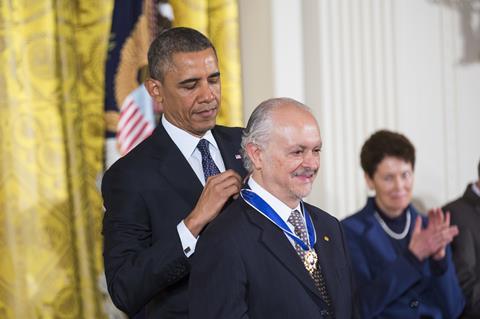 Mario Molina, who was a joint-recipient of the 1995 Nobel prize in chemistry, has died aged 77.

In 1974, Molina and his then postdoctoral supervisor Frank Sherwood Rowland sounded the alarm over the role of common household chemicals in the destruction of the ozone layer. Their research showed how chlorofluorocarbons (CFCs) that were widely used in aerosol cans and refrigerators would dissociate when subjected to intense ultraviolet light in the stratosphere. This process generates chlorine atoms that catalyse ozone decomposition.

Molina and Rowland calculated that unless CFC use drastically reduced, the ozone layer would be seriously damaged within decades. It was for this work that Molina and Rowland were awarded the Nobel prize alongside Paul Crutzen, who had revealed the role of nitrogen oxides in ozone depletion.

Molina was born in Mexico City, Mexico, in 1943 and became interested in chemistry at an early age. After attending boarding school in Switzerland, he completed a bachelor’s degree in chemical engineering at the National Autonomous University of Mexico, before gaining his doctorate in physical chemistry at the University of California, Berkeley in 1972.

Following his doctoral studies, Molina joined Rowland’s lab at the University of California, Irvine, where the pair would conduct their crucial investigations on CFCs. At first their findings attracted scepticism and resistance, but further research supported their initial conclusions and paved the way for the signing of the Montreal Protocol – a major international commitment to phase out ozone-depleting substances that has been ratified by all 197 UN member states and is widely credited for helping to reverse the damage to the ozone layer.

Molina also dedicated much of his time to science policy, particularly in relation to climate change. He served as a scientific adviser to two US presidents, Bill Clinton and Barack Obama, and in 2004 he founded the Mario Molina Center in Mexico City, an environment-focused non-profit association. In April this year, he called for heads of state, global society and large businesses to collaborate on achieving the goals set out in the Paris Agreement.

In a statement, UCSD’s chemistry department described Molina as ‘a true hero’ in the field of chemistry. ‘His Nobel prize winning research on chlorofluorocarbons (CFCs) and his strong leadership showed how science can guide international agreements and policy. His research and teaching on climate change have inspired a new generation of scientists,’ it said.

Molina passed away on 7 October 2020 following a heart attack. He is survived by his wife, Guadalupe Álvarez, and a son from his first marriage.