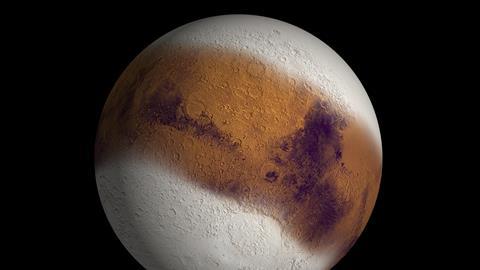 Most of Mars’ water came from asteroids

Asteroids bombarding Mars in its early history could have delivered organic molecules and vast amounts of water – enough to cover the entire planet 300m deep.1 The finding offers a glimpse at where Mars’ water came from as well as how it could have once had the necessary ingredients for life to emerge.

Mars orbiters had already revealed signs that an ocean once existed in the northern hemisphere on Mars , 4.3 billion years ago. However, the amount of water had remained uncertain, with estimates relying on features such as presumed ancient shorelines. The origins of the water, too, have remained elusive. Some models propose that water came from gas trapped inside the planet, collecting on the surface as the mantle cooled and the crust formed.

But it seems that even greater quantities of water actually came from the outer solar system. ‘Our study is the first that demonstrates there must have been a large amount of water-rich carbonaceous asteroids that bombarded the planet in its early evolution,’ says Martin Bizzarro at the University of Copenhagen, Denmark. ‘This firmly establishes that organic molecules relevant for life must have been present in the early evolution of the planet together with water.’

The researchers analysed 31 Martian meteorites found on Earth. These meteorites originated from lava erupting through the planet’s surface, which caused some its crust to assimilate into them. Since Mars has no plate tectonics, its crust is as old as the planet. This means the meteorites can contain traces of the asteroids that once hit Mars, in the form of chromium isotopic signatures.

Chromium isotopes are a good yardstick for identifying different kinds of space rock. Bizzarro and his team developed a way to measure chromium isotopes that is five times more precise than other methods. They found that some meteorites’ isotopic signatures matched those of water-rich asteroids known to originate in the outer solar system. 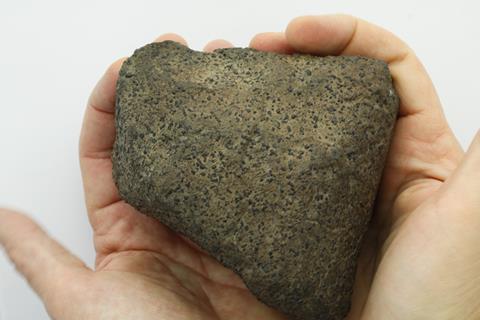 The team analysed 31 meteorites such as this one. It contains volcanic rock from the Martian mantle that erupted at the planet’s surface

‘The magnitude of the isotopic shift between the original mantle-derived chromium and that of the lavas contaminated by the exotic chromium allows us to determine the mass of asteroids that had to be delivered to the surface of Mars,’ explains Bizzarro. ‘This, in turn, allows us to estimate how much water and organics were delivered to Mars by these asteroids.’ He says the findings are consistent with records on Mars’ craters.

‘This adds to the growing body of evidence that planets including Earth and Mars do not necessarily start off with enough water to support the evolution of life, but instead need to have it delivered from outer parts of the solar system,’ comments planetary scientist Martin Lee at the University of Glasgow, UK. ‘Also, an effective water delivery mechanism may be another factor to consider when evaluating the potential for life in exoplanetary systems in other parts of the galaxy.’

‘It would be great to have access to samples currently collected by Perseverance,’ adds Bizzarro. ‘It would allow us to directly determine the chromium isotope of the primordial crust that has been affected by the bombardment and confirm our results and interpretations.’

‘It is likely that at least of part of Earth’s water may also have been delivered by this late bombardment of carbonaceous asteroids,’ Bizzarro speculates. Indeed, another study2 led by Luke Daly at the University of Glasgow, UK, lends support to this.

Daly and his team showed that the hydrogen isotopic composition of the Winchcombe meteorite, which crashed onto a family’s driveway in England in early 2021, is comparable to that of terrestrial water. Since the meteorite came from an asteroid, it suggests that they played an important role in supplying Earth’s water.

‘Both [studies] come to very similar conclusions that water and organics – the building blocks of life – were delivered to the Earth and Mars by carbonaceous chondrite asteroids early in those planets’ histories,’ says Daly. ‘This is a really nice double whammy.’