US researchers have improved an ice-free cryopreservation technique by using mathematical models to minimise toxicity and damage caused to cells during the procedure. The approach could improve long-term storage and availability of cells for drug screening and biosensors and possibly allow for extended storage of tissues and organs. 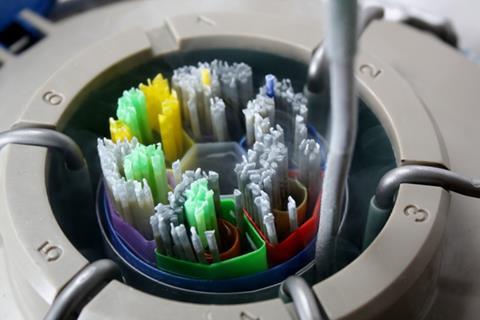 Though cryoprotective agents prevent ice formation inside biological tissue during cryopreservation, they are toxic to cells in

Cryopreservation is routinely used for long-term storage of cell cultures in a suspension medium. The process usually involves adding a low concentration of a cryoprotective agent (CPA) such as dimethyl sulfoxide and then slow cooling before storing in liquid nitrogen. However, this isn’t very effective for storing tissue samples or adherent cell cultures – which are grown as a single layer on an artificial substrate – because these are more susceptible to freezing damage caused by ice formation.

Vitrification is an ice-free cryopreservation technique that offers a potential workaround by adding higher concentrations of a cryoprotective agent to form a glassy solid and prevent ice formation. However, higher concentrations of cryoprotective agents are toxic to cells. Now, Adam Higgins at Oregon State University and colleagues have shown it’s possible to minimise toxicity by using mathematical models to predict the optimum parameters for the procedure.

‘We sought to develop a mathematical model of CPA toxicity, and to use the model to design minimally toxic methods for equilibration of the sample with CPA prior to storage in liquid nitrogen and for removal of the CPA after warming back to ambient temperature,’ says Higgins. ‘We’ve now experimentally validated the efficacy of the mathematically optimised procedures and extended the optimisation approach to account for the effects of temperature on toxicity.’

The team’s optimisation approach involved three mathematical models: first, a mass transfer model; second a model of osmotic damage; and third a toxicity model. Experiments determined the parameters for each of these models and the team then used the models to design vitrification procedures with minimal toxicity.

‘One of the joys of mathematical optimisation is that you set up a problem and then you let the computer spit out the answer. In this particular case, we were surprised by the mathematically optimised CPA addition method,’ says Higgins. He explains that CPA concentration is normally increased gradually in multiple steps to avoid excessive cell shrinkage. ‘But the optimised procedure called for CPA loading using CPA in hypotonic buffer – this actually causes cell swelling, which was not something that I anticipated. It turns out that swelling helps to reduce toxicity by enabling the use of a lower CPA concentration for CPA loading.’

‘By looking at how, when and at what temperature they added the cryoprotectants, significant improvements were achieved,’ comments Matthew Gibson who investigates cryopreservation at the University of Warwick, UK. ‘The future challenge of applying these models to larger volumes of tissues and organs, containing several cell types where addition and removal of the large volumes of solvents is non-trivial, and it will be interesting to see the progress.’