Researchers in Switzerland have side-stepped membrane-cost issues getting in the way of sustainable water-splitting by designing a device that does without a membrane.

In a conventional water splitting electrolyser, where hydrogen is formed at the cathode and oxygen at the anode, an ion-conductive polymer membrane sits between the two electrodes. One of the membrane’s vital roles is to prevent an explosion by keeping the two gases apart. However, these polymer membranes, of which Nafion is the most well-known, are expensive to produce and require routine replacement. And because they are only stable at high acidities, they only work with pricey metals such as platinum or iridium. 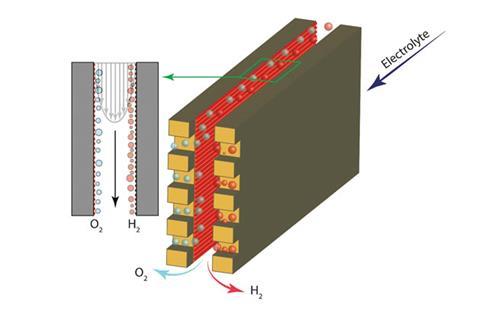 Now a team led by Demetri Psaltis at the Swiss Federal Institute of Technology Lausanne has developed a membrane-less electrolyser. In the device, two parallel electrode plates are coated with hydrogen and oxygen evolution catalysts. The plates are separated by less than a few hundred micrometres; this tiny gap is key to the device working. When electrolyte flows between the catalytic plates, hydrogen and oxygen evolve at their corresponding electrodes. These gases do not mix because lift forces in the narrow passage push them towards the wall they evolved from. This is known as the Segré–Silberberg effect.

Each product can then be collected at dedicated outlets. ‘We saw that, depending on the velocity at which the electrolyte flows, we get effective separation,’ explains team member Mohammad Hashemi. ‘The amount of oxygen in the hydrogen was less than 4% – this is lower than the explosion safety limit.’

‘The very elegant idea pursued in this research is that there simply is no membrane, and therefore there is no issue with pH stability, nor with electrical resistance, besides the electrolyte conductivity itself,’ comments Han Gardeniers whose research at the University of Twente in the Netherlands involves miniaturised chemical synthesis. Neutral electrolytes tend to be less corrosive so open a door to using cheaper catalysts.

This microfluidic device provides a promising proof-of-concept and the group are now scaling it up. As the only dimension that needs to be kept small is the distance between electrodes, they are experimenting with high surface area, planar electrodes that can be used as side walls for the narrow electrolyte channel.

Chemical Engineer, Daniel Esposito, from Columbia University, US, is excited by the work: ‘If researchers are successful in demonstrating modular, scaled-up prototypes, this concept could become a truly disruptive technology in the field of renewable hydrogen production.’

This article is free until 1 June 2015. Download it here: