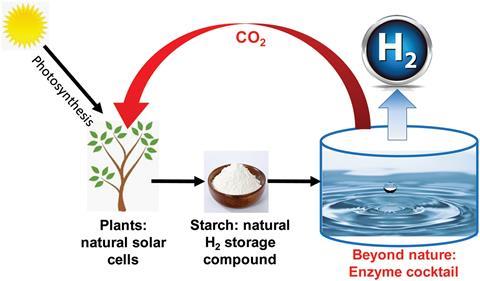 Scientists have refined a bio-based method for producing hydrogen

Researchers in China and the US have developed a method for producing hydrogen that uses a cocktail of enzymes running on starch to split water.

Hydrogen is a potentially beneficial source of clean energy. The quest to find new hydrogen production, storage and distribution methods is extremely important if this renewable fuel is to become practical and cost-effective. Current methods to produce hydrogen involve splitting water using solar energy and algae or a photocatalyst. Solar water splitting, however, suffers from scale-up and hydrogen storage problems as it only produces hydrogen slowly.

One alternative is to use enzymes running on renewable carbohydrates to split water to generate hydrogen. Yi-Heng Zhang from the Tianjin Institute of Industrial Biotechnology has been working on such an approach for the past 10 years. Now, his team has shown that a cocktail of 15 enzymes running on biomass-derived starch can generate one gram of hydrogen per litre per hour – a rate 1000-fold better than previous biohydrogen production methods. 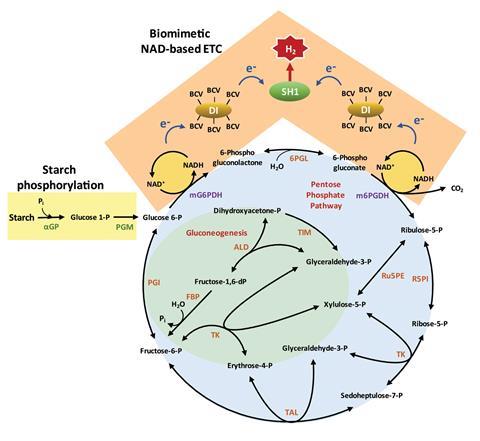 Scheme of the enzymatic pathway

The enzymatic process begins by phosphorylating starch to generate glucose 6-phosphate, a dehydrogenase enzyme. This enzyme contributes to an NAD-based oxidative pentose phosphate pathway to obtain NADH. Usually in vitro enzymatic pathways for hydrogen production use NADP as the electron acceptor. Converting NADPH to NADP+ ultimately generates hydrogen. One of Zhang’s research goals was to replace NADP with the more cost-effective and stable NAD. Changing the preference of the dehydrogenase enzymes (glucose 6-phosphate and 6-phosphogluconate) from NADP+ to NAD+ achieved an NADP-free enzymatic process for hydrogen production. Other enzymes in the cocktail then produce hydrogen via a biomimetic electron transport chain – consisting of diaphorase, benzyl viologen as an electron mediator and [NiFe]-hydrogenase.

Shaohua Shen, a water-splitting expert at Jiaotong University in China, says ‘this pathway is interesting and promising in that fast electron transfer can be facilitated by a benzyl viologen-conjugated diaphorase. This biological water splitting in darkness could be a promising solution to the distributed production of continuous green hydrogen using renewable carbohydrates.’

Hydrogen production continued for up to nine days when the team added starch continuously to the enzymes. Potential scale-up of the system may improve costs relating to land consumption. Indirect water splitting in an 80m3 bioreactor could produce 1500kg of hydrogen every day. In comparison, solar water splitting would require 100,000m2 of land.

‘This extraordinary result with clarified electron pathways could offer opportunities to scale-up the system and, moreover, it is possible to integrate them with other systems for mimicking photosynthesis to achieve absolute sustainability,’ comments Xinchen Wang, a solar energy researcher at Fuzhou University in China.

As for the future, Zhang has clear goals: ‘We expect that we will develop a sugar-powered vehicle, where the on-board sugar-to-hydrogen bioreactor will generate hydrogen. I hope that we can make the car from the movie Back to the future a reality within the next few years.’