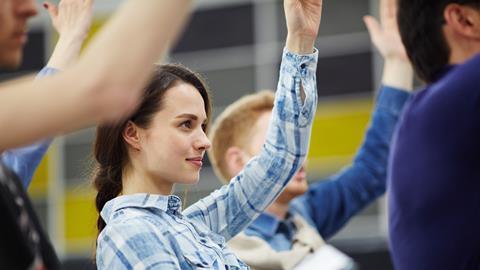 A study of behaviour at an international scientific conference has found that male delegates ask more questions than their female colleagues, which researchers say is symptomatic of gender inequalities in science.

A team of UK-based conservation scientists monitored conference sessions at the International Congress for Conservation Biology in Montpellier, France in 2015, and analysed the gender and approximate age (based on a visual assessment) of those selected to ask questions.

Across the 31 sessions and 270 questions surveyed they found that male attendees asked 1.8 questions for each question from a female attendee, once the proportions of men and women at each session had been taken into account. The ratio among younger participants (those under 50) was also 1.8 questions asked by men to every one asked by women, suggesting the gender imbalance is unlikely to be caused by generational differences. They also found the gender of the session chair or speakers had no significant effect.

The researchers say there needs to be more research around issues of gender equality and participation. Although this area has been investigated in school-age children, their study was the first to compare the discussion behaviour of different genders at an international conference.