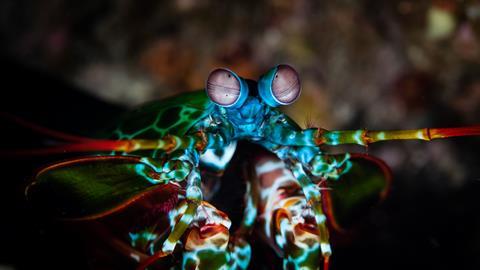 Researchers in the US have uncovered the chemical secrets behind the mantis shrimp’s extraordinary body armour. The findings could help engineers design impact-resistant materials for personal protective equipment or even for use in cars and aircraft.

Mantis shrimp are famous for the ferocious way they attack their prey. Many species use hammer-like appendages to smash open the shells of molluscs and crustaceans, swinging their dactyl clubs at speeds over 50 miles an hour and generating forces up to 1500N. But how do they avoid sustaining damage themselves during these high-stress events?

A team led by University of California, Irvine, materials scientist David Kisailus has analysed the impact-resistant coating on the shrimp’s dactyl club. Using transmission electron microscopy and atomic force microscopy the researchers made a 3D map of the club’s surface layer.

This was found to comprise a network of hydroxyapatite (calcium phosphate) nanoparticles embedded within an organic matrix. The inorganic nanoparticles are themselves aggregates of closely aligned nanocrystals, while the organic material is mostly chitin and proteins that influence the biomineralisation process.

This structure is crucial for absorbing shock as the mantis shrimp strikes its prey. Upon impact, the nanoparticles can crack along the interfaces between the crystalline components – a process that dissipates large amounts of energy. The softer organic material also helps to dampen the effect of any blows.

The researchers say that the particulate layer’s combination of stiffness and shock-absorbing properties outperform many artificial materials and could provide inspiration for new lightweight protective coatings with potential uses in construction, vehicles and body armour.