New catalytic approach turns hydrocarbons into hydrogen fuel and solid carbon, which could be stored underground or turned into high-value products 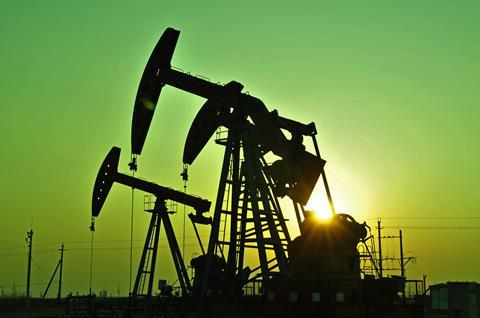 Researchers in the UK and Saudi Arabia have devised a technique to generate high purity hydrogen from fossil fuels that doesn’t liberate carbon dioxide into the atmosphere. Their microwave-initiated dehydrogenation process uses inexpensive iron particle catalysts and works on heavy crude oil through to diesel, petrol and methane. However, other researchers in the field remain skeptical about how efficient the technique is.

Hydrogen’s use as a clean energy carrier is limited by a lack of infrastructure, and safe and available sources. Peter Edwards from the University of Oxford and his team wanted to develop an efficient route to rapidly liberate hydrogen on-board from naturally occurring fossil fuels, making use of the currently available infrastructure, since these carbonaceous sources will still power our society in the foreseeable future.

‘Our advance offers a fundamentally different approach,’ says Edwards. The concept unites two scientific fields – fundamental physics and chemical catalysis. It is grounded in work on size induced metal-to-insulator transitions, which occur when metal particle sizes decrease to the point where quantum effects kick in. In essence, as the electronic conductivity within a particle drops, its microwave absorption increases dramatically. Applying this to inexpensive iron particles enabled the team to form microwave-absorbing catalytic particles that they used to rapidly evolve hydrogen from hydrocarbons such as diesel, oil and methane.

Our vision is to use hydrocarbon fuels through existing distribution systems to rapidly supply clean hydrogen, in volume, with no attendant carbon dioxide emissions

The byproduct of the process is solid carbon in the form of multi-walled carbon nanotubes, which can be converted into high value products such as catalysts, carbon electrodes or building materials. Alternatively, the solid carbon can be stored underground. 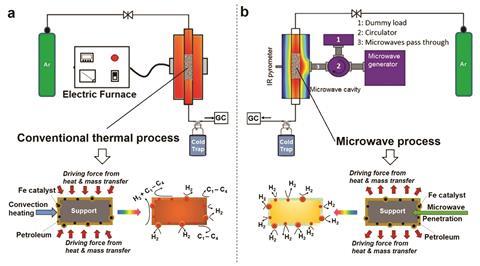 Compared to a conventional heating process (a), in which a dispersed iron catalyst is gradually heated by convection heating of, and heat transfer from, the surrounding hydrocarbon fluid, microwave irradiation (b) directly and preferentially interacts with the iron catalysts without significantly heating up the bulk of the hydrocarbon feedstock. This causes a rapid heating of the microwave-absorbing metal catalyst particles themselves and may potentially increase the resulting product selectivity itself

‘The scientific community is struggling with the fossil fuel problem, and we badly need exciting novel suggestions such as this one to help us transition to a sustainable future energy economy,’ comments Robert Crabtree, from the centre for green chemistry and green engineering at Yale University, US.

Comparing hydrogen’s enthalpy of combustion to electricity power consumption, the researchers claim to achieve a large positive net energy balance, however, they recognise that this ratio is dependent on the amount of absorbed microwave power. As it stands, 75–90% of the microwave energy used is lost. Attributing this to the high-power microwave device relative to a small sample volume, Edwards’ team claims that larger-scale microwave systems would be designed to achieve 99.9% efficiency using renewable sources of primary electricity, however, other researchers seem unconvinced.

‘At present, 0.5% of the energy from the microwaves is making it through to hydrogen. The best case scenario, where they are only looking at the energy absorbed from the microwaves, gives around a 4% efficiency,’ comments Paul Fennell, a professor of clean energy at Imperial College London, UK. He notes that electricity is used to power the microwave generator, which inevitably decreases the net efficiency, adding that the process is 50% less efficient when used on a crude oil rather than a refined diesel (requiring significant energy to produce) feedstock, highlighting that the work may be far from being practical.

The catalyst suffers a significant decrease in activity due to the build-up of carbon residues after approximately 10 cycles. These residues can be removed by combustion, however, the original high activity is never fully recovered due to iron oxide being present post-combustion.

Nazim Muradov, from the Florida Solar Energy Centre, US, who has been working in the fossil fuel decarbonisation area for two decades, says the work ‘provides valuable information on the impact of microwave radiation on the kinetics and selectivity of the studied process.’ However, he also is cautious about implementing the technology: ‘The practical realisation of the process is likely to face many challenges of technological and economic nature. The energy efficiency of the process has to be improved by at least one order of magnitude, and the catalyst deactivation problem has to be fundamentally addressed,’ explains Muradov. He suggests that the process may face competition from other electricity-driven fossil fuel decarbonisation routes that are closer to commercialisation.’

‘Our vision is to use hydrocarbon fuels through existing distribution systems to rapidly supply – at the point of need – clean hydrogen, in volume, with no attendant carbon dioxide emissions,’ reiterates Edwards. He says the issues highlighted by Fennell and Muradov are at the heart of their urgent attempts to scale up advances in basic science into new technologies that might actually make a difference to climate change. ‘We have consistently acknowledged that our system for microwave-initiated catalytic dehydrogenation of fossil hydrocarbons is, of course, at a very early stage of development and the big challenges of energy efficiency, catalyst deactivation, etc., need to be solved.’ ‘Of course, similar issues such as overall process energy balance, carbon footprint, environmental impact assessment, etc., must apply to all (potentially) renewable energies in which chemists are most actively involved, whether it’s carbon dioxide capture and utilisation, energy storage batteries, photovoltaics, solar fuels. etc.’ He recommends that ‘chemists – and indeed all scientists – enthusiastically embrace life cycle analysis’.2