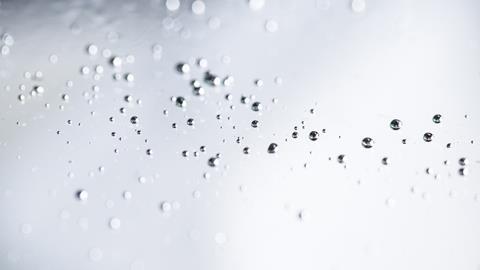 Scientists have discovered how to turn back the carbon emissions clock by converting carbon dioxide into a solid, coal-like material. The process is made possible by a liquid metal catalyst that reduces carbon dioxide at room temperature.

With carbon dioxide emissions becoming an ever bigger problem for Earth’s climate, researchers are scrambling for ways to capture the potent greenhouse gas or convert it into useful chemicals. However, many carbon dioxide capture methods produce liquids or gases. ‘There’s a lot of debate at the moment about the security of storing carbon dioxide as a gas because of potential leaks,’ says carbon conversion expert Jennifer Rudd from Swansea University, UK, who wasn’t involved in the study. 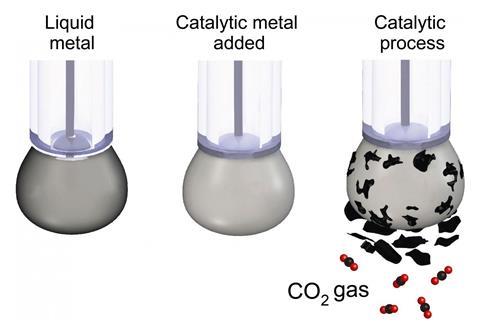 A team of Australian researchers led by Dorna Esrafilzadeh and Kourosh Kalantar-zadeh, from the University of New South Wales, and Torben Daeneke from RMIT University, has found a way to reverse fossil fuel combustion and convert carbon dioxide back into solid carbon. ‘The idea that we could store away carbon dioxide as a solid is a really exciting one,’ comments Rudd.

There are some processes converting carbon dioxide into solid products, but they only work at temperatures in excess of 700°C. The Australian team’s electrochemical reaction runs at room temperature. Key to this feat is a liquid metal electrode. 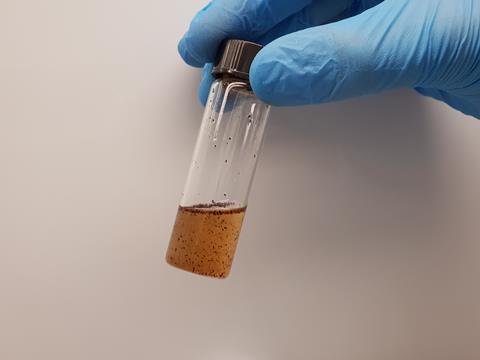 A liquid metal electrode – made from galistan, a liquid mix of gallium, indium and tin – turned out to be the answer. Solid carbon just flakes off the droplet as 3nm thick sheets that collect at the bottom of the electrochemical cell. ‘It means no complicated separation techniques have to be carried out,’ says Rudd. ‘In that sense it is scalable to an industrial process because the product is collected by filtration. Theoretically, the liquid catalyst could then be collected as the filtrate and reused.’

The liquid electrode has a second function. ‘It is actually a container for our catalyst, cerium,’ says Esrafilzadeh. Cerium dioxide is known for reducing carbon dioxide. But in its elemental form, cerium is pyrophoric and oxidises rapidly, making it unpopular as a catalyst. The liquid metal droplet acts as a reservoir for reactive cerium nanoparticles.

For now, it’s unclear how the reaction behaves in the long term, as it has only been run for 20 minutes at a time. ‘I would be looking at longer electrolysis experiments,’ Rudd says.

Nevertheless, the team hopes their coal-making process could become a viable carbon capture technology. ‘The process can be run continuously with very low amounts of energy,’ Esrafilzadeh points out. Kalantar-zadeh says that they have already come up with other liquid electrode designs as droplets become impracticable in bigger setups.