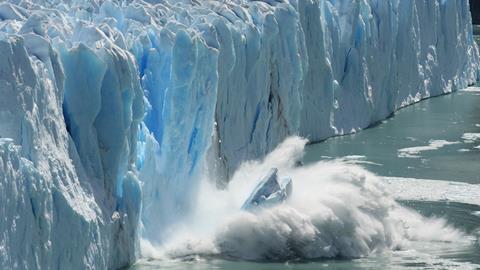 A new report from the National Academies of Sciences, Engineering, and Medicine is calling on the US government to launch a concerted effort to develop new and improved negative emissions technologies (Nets) to remove and sequester carbon dioxide directly from the air. The panel concludes that these technologies, which involve chemical processes to capture carbon dioxide from the air, are economically viable and crucial to mitigate the threat of climate change.

‘We can now say that there is a high probability that we can produce a viable way to do direct air capture at something like $100 (£77) per tonne of carbon dioxide or less,’ says Stephen Pacala, an ecology and evolutionary biology professor at Princeton University who chaired the committee that wrote the report. ‘We would then reach the capacities that the world would need to achieve the climate goals that are embedded in the Paris agreement and elsewhere,’ he tells Chemistry World. ‘It would also provide a way to continue to use fossil fuels, but without a climate impact – you could offset those carbon emissions.’ 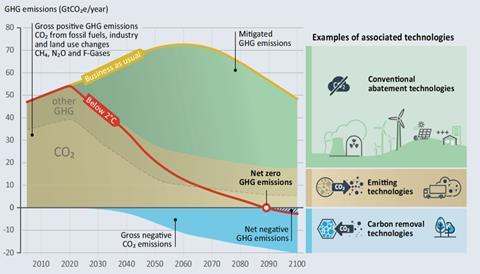 Negative emissions technologies could help to tackle climate change by actually removing carbon dioxide from the atmosphere and locking it away. The cost of doing this on a global scale would be enormous, however

The report, which was funded by the Department of Energy, National Oceanic and Atmospheric Administration and Environmental Protection Agency, among others, proposes that the government make a substantial investment in Nets as soon as possible.

The report concludes that these approaches require much more research in order to be scaled up, and they cannot by themselves capture a sufficient amount of carbon to keep the Earth’s temperature from rising another degree. ‘Uncertain research breakthroughs will be required before those Nets can provide even the minority share of the solution,’ its authors assert. ‘Any argument to delay mitigation efforts because Nets will provide a backstop drastically misrepresents their current capacities and the likely pace of research progress.’

Nearly every nation in the world has committed to limit total global warming to less than 2°C over pre-industrial levels under the Paris agreement, with an aspirational target of 1.5°C. However, President Trump announced his intention to pull out of the accord in mid-2017. The National Academies panel concludes that Nets will be key to meeting such goals.

The report determined that four Nets are ready for large-scale deployment – land use and management practices like afforestation or reforestation; changes in forest management; uptake and storage by agricultural soils; and biomass energy with carbon capture and storage (Beccs). It estimates that these technologies have ‘low to medium’ costs of $100 per tonne of carbon dioxide or less, and that they can be safely scaled-up to capture and store substantial amounts of carbon. However, the committee cautions that additional studies are needed to address the potential unanticipated damage that these four Nets could cause by, for example, changing land use or reducing biodiversity.

Klaus Lackner, who directs Arizona State University’s Center for Negative Carbon Emissions and was not involved with the report, agrees with its Nets cost estimate. ’You could very well reach a point where it comes down to $100 a ton, and then if you really start doing it – like we saw with the wind and fuel cell industries – the price drastically comes down because people get better and better at it,’ he says. ‘It could maybe even hit $30 a ton – if I look at my raw material bill, this is certainly feasible.’

He also agrees that a sustained government investment in Nets needed. ‘We have reached the point where we are now in an overshoot – we need to pull CO2 back out, and my guess is that we are talking about 100 parts per million that have to come back out of the atmosphere,’ Lackner says. ‘If you want to do this in 40 years, you have to have an ability to pull in CO2 and take it away, at the scale of current emissions.’

Aside from the huge cost – humanity emits around 50 billion tonnes of carbon dioxide equivalent into the atmosphere per year – the National Academies panel notes a number of other practical barriers to scaling up deployment of Nets. These include a shortage of materials, financing and human capital, as well as a lack of robust and reliable financial incentives.

The American Physical Society concluded in June 2011 that direct air capture of carbon dioxide with chemicals was ‘not currently an economically viable approach’ to mitigating climate change. That report estimated that the technology would cost $600 per tonne of carbon dioxide. ‘Our analysis follows seven years later, and a handful of chemical start-ups have shown that there are sneaky ways around several of the problems that were identified,’ Pacala states.

Kate Gordon, a research scholar at Columbia University’s global energy policy centre, is particularly excited about the potential for going beyond carbon capture and sequestration underground, and toward capture and utilisation of carbon in new materials that could potentially replace traditional steel and concrete. ‘If we can find ways to capture carbon, put it into materials for storage, and use those to displace high-carbon materials, that’s a win–win–win,’ she says.