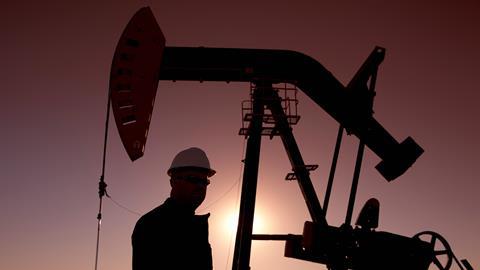 Crude oil currently provides around one third of our total energy. Oil continues to be extremely important to the wellbeing and stability of societies and countries. Yet by definition, oil and gas are finite resources, and the faster economies grow, the more rapidly the resources are depleted. While there has been some improvements in the efficiency of conversion of oil, gas and other fossils into wealth, this is barely true for the world as a whole.

A decade ago, there were serious concerns that we had hit ‘peak oil’, the point where the maximum extraction of petroleum is reached in the bell-shaped curve of production put forward by US geologist M King Hubbert in 1956. These fears were the result of a steady decline in conventional oil production in the US which, by 2007, was just half of its maximum in 1970. However, the enormous success of hydraulic fracturing (fracking) has seen this decline massively offset by the production of ‘tight’ oil from ‘shale’ (both terms are a misnomer). The US still imports about a third of the oil it uses. In global terms, oil production seems to have continued to increase through 2017 and ‘peak oil’ seems to have largely disappeared from the public’s attention. So did we really need to worry at all?

Not all investigators are complacent. At the March 2018 meeting of the American Chemical Society in New Orleans, some 20 authorities on fossil fuels and their uses outlined the present state of our most important energy resources. They warned that most of the reckoned growth in global oil output is not the result of increased production of ‘oil’ itself, but other materials such as natural gas liquids, biofuels and refinery gains. In reality, the ageing and depletion of the world’s 400 largest oil fields, which still provide the majority of global supplies, means production of conventional oil has been flat since 2005. In addition, increased exploitation of non-traditional resources, from progressively difficult and hostile environments, has reduced the energy return on investment of oil, and probably all fossil fuels.

More generally, most official pronouncements of reserves – and estimates of future production rates, for oil, gas and coal – and even their definitions, lack reliability and frequently have a cryptic element. New approaches, based on production dynamics, rather than geological prospecting, can give independent and reproducible estimates and these are often considerably less than the official declaration.

As a consequence, Hubbert’s ‘peak oil’ concept remains broadly valid for most oil-producing countries, the majority of which have passed their production peak, while following a ‘Hubbert curve’. For the world as a whole, the fit is a bit more ambivalent, at least so far.

Fracking is unlikely to be the answer. Although this has proved remarkably successful in the US, where it currently delivers 50% of domestic oil production, and 60% of dry natural gas, it is debatable for how much longer this can be sustained. Fracking works well in terms of finding oil or gas, yet the initial (relatively large) production declines precipitously within a year or two. The likely prospects for shale exploitation more widely across the world are also largely unconfirmed.

The success of the fracking industry, so far, is based on the very intensive exploitation of relatively small ‘sweet spots’, which are approaching full drilling capacity. And while production figures have been high the financial results are far less impressive. Few firms make a profit even with oil at $100 (£79) a barrel, and essentially none when oil is $70 or $50 a barrel, despite drilling-service companies greatly reducing their own costs. Our final conclusion is that, so long as oil companies are losing money, it is debatable for how much longer they can carry on.

Fatih Birol, the executive director of the International Energy Agency (IEA), based in Paris, France, has stated that demand growth for oil will be maintained over the next few years due to increasing requirements by industry, aviation and for petrochemical manufacture. However, the present small number of newly approved drilling projects in countries such as Saudi Arabia and Russia means that a global supply crunch can be expected to occur by the mid-2020s. Birol further emphasised that the theory that the suggested shortfall might be made up by US tight oil will be severely tested, since between now and 2025, the US would need to increase production by more than 10 million barrels per day. ‘In other words,’ Birol added, ‘the US needs to add one single Russia’s [worth of oil production] in seven years’ time in order to avoid a major tightening in the markets. It can happen – but it would be a small miracle.’

Given that the companies investing in fracking are losing money at almost any price per barrel, and that the price is falling, we think such a miracle is unlikely. Thus we, and those energy analysts that met in New Orleans, agree with Birol: Hubbert’s analysis is alive and well (if somewhat delayed), our oil future is very uncertain, and the world is totally unprepared for this eventuality. Even if a decade, or possibly two, has been gained with fracking, nothing has been done to reduce demand for oil in that interim. Meanwhile, our teaching and use of economics is badly in need of incorporating the importance of energy in its operation and future assessment.

Chris Rhodes is an independent consultant based in Reading, UK, and Charles Hall is a professor at the State University of New York, US