Mirror peptides hitch a lift into the cell

Hijacking nature’s tricks to smuggle drugs across the cell membrane 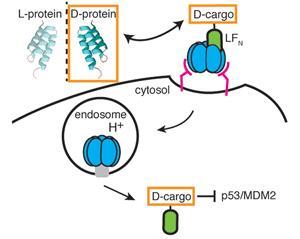 Scientists in the US have developed a method for successfully transporting chemotherapeutic d-peptides into the cell cytosol.1

d-peptides – also known as mirror peptides, as their constituent amino acid building blocks are mirror images of the naturally occurring l-amino acids – have been an intriguing target in drug development for many years. Their unnatural stereochemistry results in high resistance to proteolytic degradation as intracellular enzymes are unable to act upon them – usually a major pathway for the destruction and removal of ‘foreign’ peptides, including those intended as therapeutic agents, in cells. However, transporting these molecules across cell membranes has been a significant barrier to their potential application.

Bradley Pentelute and his team at the Massachusetts Institute of Technology, US, employed the cellular machinery normally used by the bacterium Bacillus anthracis to transport the anthrax toxin into cells. Under normal conditions, the three component system, consisting of protective antigen (PA), lethal factor (LF) and edema factor (EF), forms a pore in the cell wall to transport LF and EF to the cytosol, where they can act upon their targets. Attaching a cargo peptide to the N-terminal domain of LF (LFN), the team was able to translocate both l- and d-peptides into cells using the anthrax mechanism. Significantly, once inside the cell there was a difference in the fates of the two peptides: ‘We found that the d-peptide had increased intracellular stability in comparison to its l-enantiomer’, explains Pentelute, confirming the d-peptide’s enhanced resistance to degradation.

Following their initial success, the researchers showed that the same mechanism could be used to transport a bioactive d-peptide known to disrupt the p53/MDM2 interaction in cancer cells,2 an interaction that inhibits the tumour-suppressor activity of the p53 protein. Despite the potential for the bulky LFN tag to interfere with the peptide’s binding ability, the peptide retained its activity, bound to MDM2 and prevented p53/MDM2 binding.

‘This delivery approach could be a highly adaptable way of introducing a wide range of stable, designed peptides into cells for therapeutic applications’, says Ian Eggleston, whose research at the University of Bath, UK, focuses on the design and delivery of drugs and the application of peptide chemistry to problems in biology and medicine.

The question now is: what else can be transported into the cell using this mechanism? An increase in size from the current 6kDa peptide seems likely, given that the anthrax LF protein is 90kDa. ‘Since we now know that translocation through PA is independent of stereochemistry, we are interested in understanding the different types of cargo that the PA pump can accommodate’, says Pentelute, suggesting that there may be potential for other types of molecules beyond peptides to be smuggled into the cytosol.