US scientists have used a retrosynthetic approach to uncover a method for synthesising β-amino amides with improved stereocontrol in what the research group are calling ‘the first enantioselective double umpolung reaction’ to β-amino amides.

β-amino amide structures are motifs found in many complex natural products, differing from their more common α-amino amide counterparts by an extra carbon between the amino and amide groups. This extra C–C bond endows the structure with better proteolytic stability, in comparison to α-amino amides, and has led to their use in many important therapeutic molecules. However, forming certain configurations of β-amino amides in a stereocontrolled manner is often difficult.

Jeffrey Johnston and Mahesh Vishe of Vanderbilt University wanted to find a better strategy for making these structures. Starting with β-amino amide products, they took a retrosynthetic approach, disconnecting the key bonds within the molecules. From this, they could evaluate the possible different synthetic routes to the molecule by examining the different theoretical starting structures, known as synthons. 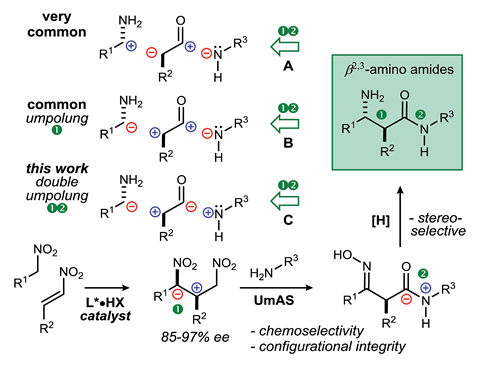 Approaches to β-amino amides often focus on β-amino acid preparation and subsequent conversion to an amide. This work takes a double umpolung approach

In a typical synthetic strategy, the synthons will have a negative charge on the more electronegative atoms (ie the nitrogen or oxygen); however, it is also possible to disconnect a bond in the opposite way to give synthons of the opposite polarity. This approach is termed umpolung, from the German word for reversal. By disconnecting not one but two bonds in this manner – a double umpolung strategy – the researchers developed a new synthetic method with improved stereocontrol.

‘Revealing this pathway changes the way we can think about the synthesis of β-amino amides,’ says Johnston. ‘We were able to develop a route to one of the least accessible configurations of β-amino amide which is concise, selective, stereospecific and gentle.’

The overall synthesis has three steps. First, using a conformationally restricted catalyst, nitroalkanes undergo an enantioselective Michael addition to give β-nitro nitroalkanes. These are then stereospecifically converted to the corresponding β-oximino-amides; the nitroalkane groups converting to amides whilst the β-nitro group reduces to a β-oximino group. The final step reduces the β-oximino to give the anti-β2,3-amino amide products.

Johnston hopes that this work will inspire others in the field to exploit the concept of double umpolung in amide synthesis. ‘If we can de-risk the approach by showing the synthetic community how to access the associated synthons, using new tools if we need to develop them, then we can encourage a broader application in target synthesis.’

However, not everyone is impressed by this synthetic route. ‘Indeed, approaches like this that reverse the polarity are less common, but most likely for a reason, as they are less practical or lack generality,’ says Vadim Soloshonok, a synthetic chemist at the University of the Basque Country, San Sebastian, Spain. ‘One may wonder when we will see the “triple umpolung”.’