Researchers in India have taken a step towards selective gene regulation by making a peptide-based artificial transcription factor that can upregulate a luciferase reporter gene in mammalian cells.1

Transcription factors are proteins that bind to specific DNA sequences and control gene expression by converting DNA to RNA. Since transcription factors are important for turning genes on or off, the researchers hope that artificial transcription factors could treat diseases by rebalancing perturbations in cellular pathways. Lead researcher, Siddhartha Roy, from the Bose Institute in Kolkata, says their work ‘is part of a continuing effort to develop small peptides that are deliverable inside the cell and can regulate – either inhibit or activate – the expression of specific genes.’

Gene therapy tends to use small molecules rather than peptide-based drugs, which are hard to deliver to target cells. However, peptides tend to be more biocompatible and less toxic than synthetic small molecules, so they are the preferred therapeutic agents. Transcription factors operate inside the cell nucleus and need to cross the oily intracellular membranes to reach their target sites. Since peptides tend to be polar, Roy’s team added amino acid sequences to the synthetic transcription factor to allow it to pass through the plasma and nuclear membranes. The peptide-based cell-permeable artificial transcription factor therefore does not need a transfection agent to reach the target DNA inside the cell nucleus, boosting its therapeutic applicability.

Eugenio Vázquez, who works on DNA-binding peptides at the University of Santiago de Compostela, Spain, applauds the artificial transcription factor’s simple design. ‘It combines sophisticated chemical tools to stabilise the conformation of the peptide structure, including a sequence to allow cellular internalisation, a nuclear localisation signal to enable its delivery to the nucleus, and a short activation sequence to induce gene expression,’ he says. 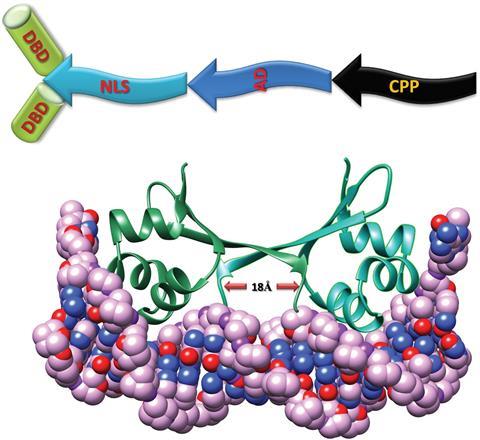 In 2007, researchers from the University of Texas, US, created a polyamide-based transcription factor mimic and discovered that activating gene transcription required multiple target sequences.2 By expressing a luciferase gene in a reporter plasmid they proved that synthetic transcription factors made of peptides could activate gene expression through transcription. The current study also found that in addition to binding to the luciferase target site in the plasmid with high affinity and specificity, the artificial transcription factor could upregulate genes within the cell’s own genome.

Aseem Ansari, who studies gene expression at the University of Wisconsin–Madison, US, explains that ‘although the design of synthetic peptide molecules shows promise for restoring function in cells, avoiding downstream toxicity may be challenging’. In this case, the cells remained viable after the artificial transcription factor was added.

Vázquez finds this work exciting ‘because it clearly shows that designed peptides can target specific DNA sequences in cells and control complex cell processes’. Roy’s team hopes to develop more molecules for selectively activating repressed genes in mammalian cells and he believes this could pave the way for future applications of peptides as therapeutic agents for diseases caused by aberrant gene regulation.