Researchers in the United Arab Emirates have developed and validated a tool for assessing the potential performance and economic viability of newly developed adsorbents for post-combustion CO2 capture.

The tool, developed by Ahmed Al Hajaj, Lourdes Vega and colleagues at the Khalifa University of Science and Technology, integrates molecular simulations with a dynamic process model. Molecular simulations generate adsorption data on the molecular level for screening materials, while the dynamic process model simultaneously optimises operating conditions and provides a technoeconomic analysis.

Al Hajaj explains that currently ‘most of these materials are only evaluated at the lab scale with limited operating conditions, without knowing how they will actually perform at industrial conditions.’ Generally, only more established zeolite adsorbents have been tested extensively at the pilot scale. Existing models for evaluating adsorbents often fail to properly consider the size of equipment, operating variables and cost, leading to inconsistencies in performance following process scale-up. 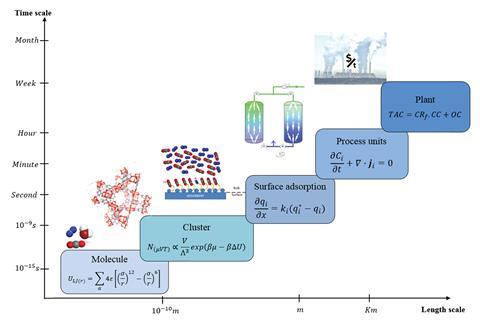 To combat the limitations of previous models, the Khalifa team considered non-monetised key performance indicators including purity of CO2 captured, quantity of CO2 recovered and energy required for the capture process. These were combined with monetised indicators such as the CO2 capture and compression cost to give a complete picture as to the suitability of adsorbents for carbon capture on an industrial scale. ‘The aim is to investigate a material’s ability in meeting the US Department of Energy’s targets of 90 and 95% recovery and purity, respectively, and trade-offs at the industrial-scale level, in a predictive manner, without the need to do the experimental implementation to test them,’ says Vega.

To demonstrate the usefulness of the multiscale model, the team used it to evaluate five adsorbent materials, which included carbon-based adsorbents, traditional zeolites and metal–organic frameworks (MOFs). They then tested the materials with dry flue gas in a commercial-scale carbon capture system. Of the adsorbents investigated, the MOF UTSA-16 performed as well as traditional zeolite 13X, which is widely used in industry. However, due to the costs associated with synthesising MOFs, zeolite 13X was still the best performing low-cost material.

Kyra Sedransk Campbell, an expert in sustainable energy and resource engineering at the University of Sheffield, UK, comments that the methodology is ‘tackling the issue, to some extent, that making an amazing material isn’t necessarily going to translate at an industrial-scale, and that is extremely useful … these approaches certainly would resonate with many industrial R&D departments as a mechanism towards establishing the viability of materials and technologies.’

While appreciating the need to consider the commercial viability of new discoveries at the very beginning of studies, Campbell remains cautious as to whether researchers should abandon further investigations into technologies deemed to be unfeasible. ‘As a scientist, you have to ask the question whether we should stop researching things that aren’t viable from our current perspective. The risk with this is that we fixate on what we currently know to be achievable and don’t “dream big”. Simultaneously, we need to be realistic about some of the materials for the short- and medium-term.’