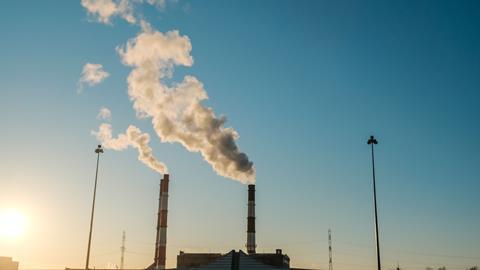 Mechanochemistry has been used to reversibly capture carbon dioxide using lysine, an abundant amino acid.1 The process is simple and quick making it a promising new tool to capture carbon emissions.

‘We put lysine in our reactor, which looks like a small pressure cooker, together with the milling balls and carbon dioxide under pressure,’ Thomas-Xavier Métro, from the University of Montpellier, France, explains. After only five minutes, the contents of the reactor seem unchanged, but the transformation is complete. ‘We still have a white powder, but lysine has reacted with the excess of CO2 to form a new compound – a carbamate,’ adds Métro. This was confirmed using a combination of solution and solid-state NMR techniques.

This answer to trapping carbon dioxide offers other advantages. ‘It works efficiently without a solvent, allowing us to reduce waste and avoid purification,’ says Métro. The formation of the carbamate is also fully reversible, offering an alternative to store carbon dioxide. To regenerate the reagents, researchers just need to heat the carbamate at 175°C. ‘It’s an easy way to liberate the gas,’ he adds. Carbon dioxide can also be released by adding a small amount of acid. ‘This is less sustainable, but also offers a quick and very visual way to test if the product has formed without needing the NMR,’ points out Métro. 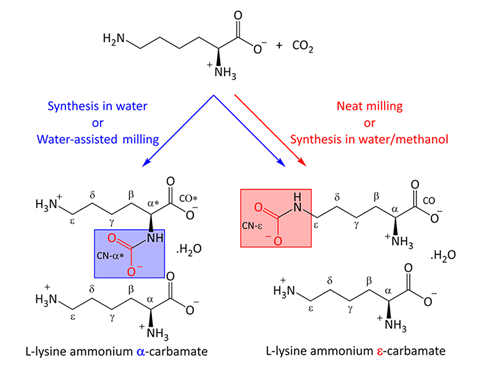 Ball milling carbon dioxide with lysine leads to the formation of a carbamate, trapping the gas

Mechanochemistry has already been explored for carbon capture, such as transforming carbon dioxide into chemical fuels – an irreversible process – and crafting new materials for gas adsorption. However, trapping carbon dioxide reversibly using a solid amine is innovative. Susana García, an expert in carbon capture from Heriot-Watt University in the UK, says ‘this is a very interesting way to capture carbon dioxide’.

‘Researchers use amines, widely used to capture CO2 in aqueous solution, and create a new methodology that needs no solvents,’ García notes. ‘This is hopeful, because our current dependence on solvents is unsustainable … problematic and hazardous,’ she says. However, as an engineer, she also sees some potential issues. While, a laboratory setting offers the perfect conditions for the reaction, carbon dioxide is often mixed with other gases and impurities. ‘It is a nice proof of concept … but only further experiments will help us assess whether this is an approach worth pursuing,’ she adds.

‘Upscaling should be straightforward – industrial mills are already used by the cement, alloys and pharmaceutical industries,’ says Métro. ‘Indeed, there is potential for mechanochemical reactors to work at commercial scales and in continuous mode,’ explains García. Moreover, previous studies hint that energy consumption decreases as you scale-up some mechanochemical processes.2 García is more sceptical, but convinced that collaboration between fundamental and applied researchers is key to achieve results. ‘Only if we bridge that knowledge gap, we can judge the true potential of this technology,’ she concludes.