Carbon capture and storage (CCS) has assumed a large role in potential strategies to limit global warming and mitigate the effects of climate change. Such technology removes carbon dioxide from power plant flue gas, or directly from the air, using a variety of separation methods including physical adsorption and separation using synthetic membranes. The captured carbon dioxide can then be stored in a variety of ways. It can be sequestered; pumped deep underground into geological formations where it is unlikely to re-enter the atmosphere, stored in a material or sold for industrial use.

Previous models predicted that even with an energy penalty for running capture equipment, removing up to 80–90% of carbon dioxide emissions in a plant operating CCS was possible, relative to one without. However, Mark Jacobson at Stanford University in the US is sceptical. By analysing emissions data from both a coal power plant with retrofitted carbon capture and use (CCU) equipment, and a synthetic direct air carbon capture and use (SDACCU) plant, Jacobson found that previously assumed efficiencies of carbon dioxide capture have been overstated. ‘Part of it is that data was not available. Before that data was available and before these plants had been built, people were just speaking theoretically.’

Jacobson set out to provide a holistic view of the process. This involved accounting for upstream emissions associated with mining and transporting fossil fuels to a power plant, and the energy used by gas turbines to power the capture equipment. The study also considered the social cost of the technology, which Jacobson defines as the sum of the energy, health and climate costs incurred by its use – factors that he says other studies have overlooked. 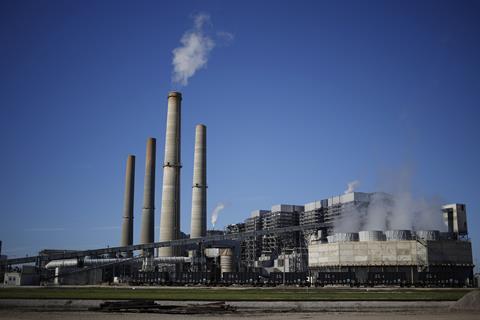 Jacobson says the latter is the best strategy – not just for reducing carbon dioxide emissions, but also for minimising social costs. ‘The most unhealthy components of air pollution, such as pollutants that form ozone … those are increased because you have a new source of pollution from the natural gas [powering the CCU equipment] – none of that is captured,’ he says. ‘When you add it all together you have a huge increase in social cost, because the equipment is so expensive and the health costs are so high, and the climate cost is only slightly reduced.’

Similarly for the SDACCU plant, which removes carbon dioxide directly from the air using gas-powered capture, Jacobson concludes that whilst some carbon dioxide is removed, the near doubling of the social cost per MWh of electricity makes it less efficient than replacing coal electricity with renewables. This, he argues, is down to the increased equipment cost and air pollution from mining – drawbacks that renewables would eliminate. ‘Using wind to replace coal was about one tenth the social cost of using natural gas to run the direct air capture (DAC) equipment. So it’s an enormous difference – there’s no reason in the world that anybody should try to pull carbon out of the air as opposed to using the same money to spend on renewable energy.’

In contrast, Wim Turkenburg, an emeritus professor of science, technology and society at Utrecht University who has worked as part of the Intergovernmental Panel on Climate Change, is positive about the prospects for using carbon capture. ‘When evaluating the performance of CCS and DAC technologies, the study refers to the present status of the technology,’ he comments. ‘However, the performance of CCS and DAC can improve tremendously as a function of time, caused by technological learning.’

Paul Fennell, a clean energy researcher at Imperial College London, UK, echoes Turkenburg’s thoughts. ‘The work appears to be based on the first few months that the CCS plant was open, and it is unlikely that this will be representative of a fully operational plant that has been operating past its start-up period.’

Specifically, Turkenburg cites research from 2017 attempting to develop cleaner and highly efficient fossil fuel plants as an example of where CCS technology could be implemented in the future.2 That study explores how to develop a fossil fuel power plant with no (direct) carbon dioxide emissions, a high conversion efficiency and low projected capital, operation and maintenance costs.

However, Jacobson argues that this is still not an optimal solution when compared to a complete uptake of renewables. ‘All such proposals require additional energy and cost, which must come from somewhere.’