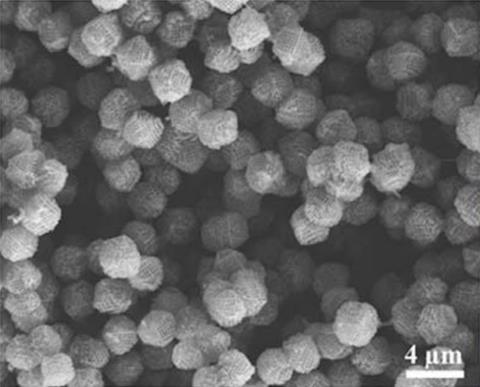 Tiny porous particles made out of a metal–organic framework that contains even smaller holes are the first macro–microporous material ever made. When tested in an organic reaction, the doubly holey crystals outperformed all state-of-the-art catalysts.

Metal–organic frameworks (MOFs) are highly porous. If it were possible to unfold 1g of MOF-5, one of the first MOFs ever made, its internal surface area would cover 2500m2. MOFs huge number of cavities and massive surface area makes them promising for gas storage, as well as catalytic applications. 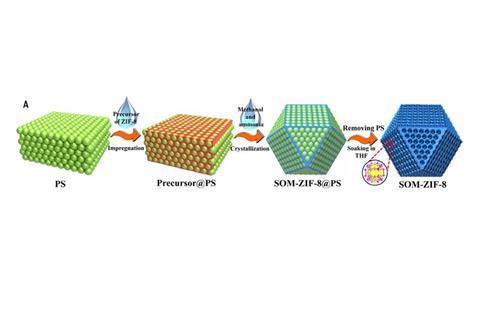 Researchers have now created a MOF that, in addition to containing its usual microscopic holes, is arranged into a regular macroscopic pore network. The team let ZIF-8 – a zinc imidazole MOF – assemble within the pores of a template of polystyrene spheres arranged into ordered particles. Once the polystyrene is removed, what remains is a negative replica of the template’s holes.

A state-of-the-art heterogeneous catalyst can catalyse the Knoevenagel condensation – a reaction between an aldehyde and a nitroalkane – to completion in 10 hours. The macro–microporous MOF can perform the same reaction within just two. The same MOF in its usual microporous-only form takes four times as long. Unlike a regular MOF, the doubly porous MOF’s reactive sites are more accessible to reagents, which can enter into the material through the macroscopic holes.

The researchers think that the material is particularly promising for promoting reactions between bulky molecules that are notoriously difficult to react.