Researchers have pinpointed the strong acid site of a sulfated-zirconium MOF catalyst by identifying a specific molecular decoration within its structure. The work could aid studies into solid acid-catalysed reaction mechanisms as well as the development of next-generation solid acid catalysts for many industrial applications.

In 2014, scientists found that MOF-808 – a zirconium-based metal-organic framework – could be washed with sulfuric acid to produce a promising next-generation solid acid catalyst (MOF-808-SO4). However, despite several proposed models, the acid site in the material has remained unknown, thereby limiting attempts to modify and optimise the catalyst. 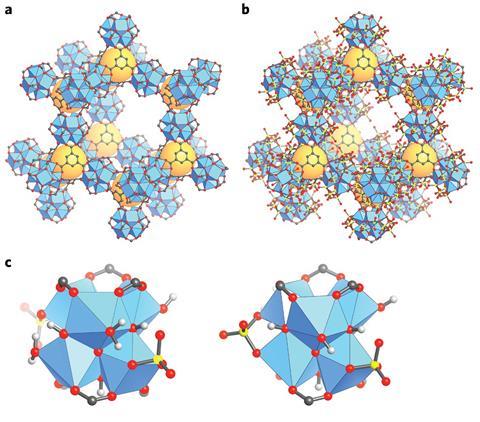 Part of the problem is that it is generally difficult to gain precise knowledge of the surface chemistry of solid catalysts due to disorder and complexity within the material. The advantage of MOF-808-SO4 is that it has a highly ordered crystalline structure of zirconium clusters. But efforts to locate the acid site have been hampered because the zirconium cluster surfaces still possess a disordered arrangement of hydroxides, sulfates and water molecules that differ from one cluster to the next.

Now researchers at the University of California, Berkeley, US, have combined spectroscopic, crystallographic and computational techniques to navigate the disordered surface chemistry of MOF-808-SO4 and conclusively locate its strong Brønsted acid site. ‘There are other weaker acid sites present in the material, but this one is responsible for the majority of its catalytic activity,’ says team member Tom Popp. ‘We are confident that we have discovered it due to the large array of techniques we used, all of which corroborate one another.’

The team first used x-ray diffraction and NMR spectroscopy to characterise the molecular species that decorate the zirconium cluster surfaces, which allowed them to produce an average molecular formula for the activated form of MOF-808-SO4. By knowing the formula, it narrowed down the possible species that decorated each zirconium cluster that could be responsible for the acidity.

Further experiments and analyses using density functional theory revealed that the Brønsted acid site arises from the hydrogen bond pairing of water and chelating sulfate that are supported on two neighbouring zirconium atoms and share a weakly bound proton. The existence of this structure was confirmed using a nuclear magnetic resonance technique that looks only at close pairs of protons.

Depiction of the zirconium cluster and Brønsted acid site in MOF-808-SO4 as determined by DFT geometry optimisation. (a) The overall cluster. (b) A close-up view of the acid site with the relevant bond lengths and angles, and with the acidic proton that participates in the hydrogen bond labelled as Ha and the other as Hb

‘Water is a molecule most of us are familiar with, so I think its surprising to see that it can take on borderline superacid character when its arranged in the correct way with sulfate on the surface of a zirconium cluster,’ says Popp. Experiments with hydrated and dehydrated MOF-808-SO4 to catalyse the dimerisation of isobutene to isooctene – an industrially relevant process for making the gasoline octane booster, isooctane – further confirmed the importance of water for its acidity and catalytic power.

Randall Snurr, who investigates MOFs at Northwestern University, US, thinks the researchers’ combination of techniques was ‘a clever piece of detective work’ to elucidate this acid site. ‘With the knowledge gained here, it may be possible to design similarly structured sites with even stronger acidity. The ability to tailor and design such sites would be an exciting development in heterogeneous catalysis.’