STAM-17-OEt has a chemical composition and structure close to that of HKUST-1, but much better hydrolytic stability

Chemists have overcome a key weakness in the class of materials known as metal-organic frameworks, or MOFs, by introducing extra weaknesses. Copper-based MOFs are often unstable, especially when exposed to moisture – even dampness in the air – explains Russell Morris from the University of St Andrews, UK.

The team includes UK’s Defence Science and Technology Laboratory (Dstl) researchers, who are interested in MOFs for gas masks or other filters that could protect people from contamination. One of the best-established MOFs, HKUST-1, also absorbs toxic gases in this way but is unstable. ‘HKUST-1 would be brilliant for lots of things, but because it falls apart in water you can use it in very few applications,’ Morris says.

The St Andrews team had previously enhanced zeolite minerals by weakening certain areas. Morris draws an analogy with crumple zones in cars, whose fronts are deliberately weaker to protect their drivers. His team exploited this principle by combining copper and 5-ethoxy isophthalate to form a MOF called STAM-17-OEt with ‘paddlewheel cluster’ cages that trap toxic gases. 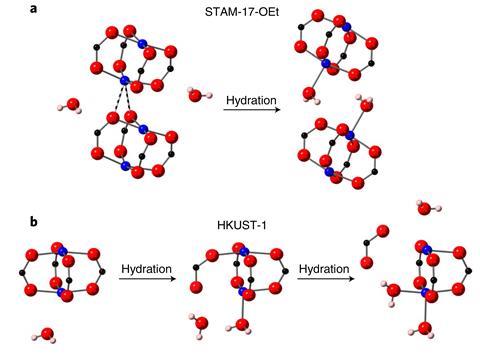 The researchers demonstrated the crumple zone’s effectiveness by studying the MOF’s structure with and without water. They used x-ray crystallography at the Advanced Light Source in California, as well as NMR analysis and DFT calculations. After removing all water, copper atoms in the paddlewheel clusters formed intermolecular interactions with oxygen atoms in neighbouring clusters. On re-adding water, the copper atoms released their neighbours and instead bound to oxygen atoms in water.

‘Upon rehydration, the critical bonds within the paddlewheel unit in HKUST-1 are broken,’ McHugh says. ‘In STAM-17-OEt, this isn’t the case. Instead we have this preferential breaking of weak interactions between paddlewheel units. That protects the core structure.’ STAM-17-OEt therefore took up the same amount of water over repeated cycles, whereas HKUST-1 took up progressively less.

MOF expert Seth Cohen from the University of California, San Diego, calls the crumple zone discovery ‘an interesting finding, which the researchers show some ability to generalise, and will likely be even more important if broader applicability can be demonstrated’. A water-stable HKUST-1 derivative ‘will likely prove quite valuable’, he adds.