Another research team have fun with fractals 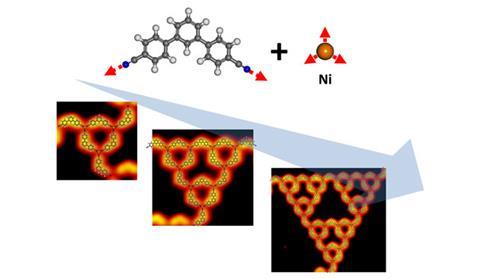 Earlier this year we reported that scientists in China had built molecular Sierpinski triangles from small aromatic building blocks. Now, another team in China has constructed fractal triangles on the molecular scale and this time, they’re much more robust.

Wei Xu’s group at Tongji University designed and synthesised bent organic molecules with carbonitrile endgroups capable of coordinating with transition metals. When these molecules were mixed with a defined ratio of nickel atoms on a gold surface, they generated metal–organic Sierpinski triangles that withstood temperatures up to 450K – as opposed to the original structures made by Kai Wu and colleagues at Peking University, which had to be kept below 80K.